Bishop Richard Wood: What is Truth?

Do you remember how at the confrontation between Pilate and Jesus, the religious leaders were hackling in the background? Pilate was so confused that he did not recognize he was in the presence of truth. The truth was Jesus himself; all he’d done and taught for three years. No one reported this to Pilate, and who believes a prisoner without witnesses? Pilate heard bad news. The truth was good news. 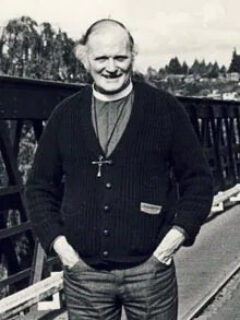 We have as great a difficulty as Pilate in recognizing the truth. We’re be-devilled by self-interests, prejudices, culture gaps and just plain ignorance. Inevitably we rely on the media to portray the news faithfully, so that we have the facts which will enable us to make a judgement. In the United Kingdom, overseas news is hard to come by; perhaps it is too seldom sought after. The popular daily papers and radio programs tell us almost nothing. The most pervasive medium today is television, strongly controlled by the government and the truth is being manipulated. That’s bad news.

But what of our own system and what of the television and media in many countries? What is the truth they portray about Rhodesia, Namibia and South Africa?

In an occasional documentary here, the overall viewpoint is presented. However, there is often a bias in the daily news reports which erodes the memory of a documentary’s attempt at objectivity.

An example was a recent BBC television news bulletin at the time when the Rhodesian army was returning from incursions into Mozambique. We were shown clips from the official Rhodesian film of the action: close-ups of dead blacks, bodies ragged, grotesquely contorted in death; a Frelimo personnel carrier exploding in flames; comment that hundreds had been killed.

Immediately following was an account of a seventy-year-old white couple who had been killed on their farm near Melsetter. We saw the funeral limousine; flowers; heard the haunting words from the Bible; relatives weeping. It seemed to me that the commentator might have well said “ Good old Smithy! He knows how to put the murdering natives in their place.” Was it good news? I don’t think so. I asked myself, “Who are the hundreds of blacks killed?”

When the South Africans raided Kassinga in Angola, just one of the ‘hundreds’ killed may well have been the fourteen year old daughter, now missing, of one of our Namibian clergy. Nestor Kakonda was killed at Ruacana on the Angolan border. He was once the secretary of our church in the north of Namibia. He helped to choose the name of our first daughter. He had a wife and family. What is my sorrow to that of their own families - hundreds of families?

If our news is to be good news, much more on-the-spot reporting should be done by one of the many competent black reporters available. At present, the balance is wrong.

We shall never begin to understand the truth of the situation until we see it also presented regularly and relentlessly through ‘black’ eyes. Many might not like what they saw and heard. That is not the point. The point is that news should be good news.

So, what is the truth?

A good question that, and never so relevant as when it is asked at a time a decision is being made which will crucify the truth.