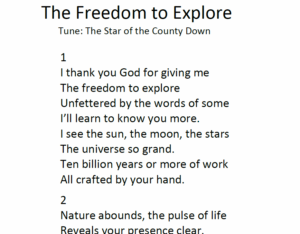 Monty Lynds displays a great affinity with the natural world in his writing. In this hymn he portrays the vastness of the universe and the pulse of nature as a window on the divine which contrasts with the narrowness often found in religious fundamentalism.

Monty has given permission for this material to be used in public. He retains the copyright and would like to be credited. © Monty Lynds 2006. His permission should be sought if it is to be changed in any way or to be included in a published collection of any kind.