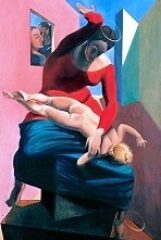 ​Adrian Alker is a trustee of PCN Britain. The titles of his three talks are

Honest about the Church

A series of Powerpoint slides accompanied these talks.

Image is Max Ernst's The Blessed Virgin Chastises the Infant Jesus Before Three Witnesses: A.B., P.E. and the Artist (1926). It currently hangs in the Museum Ludwig in Cologne