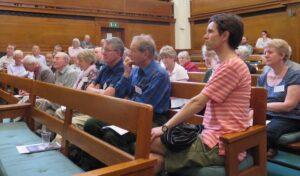 This clip is part of a conference led by Mark Townsend, called Seeing Jesus Again with New Eyes, which took place on May 17th 2014 at the Priory Rooms in Birmingham. Mark describes himself as a hedge priest because he finds himself sympathetic to Druidism. In the afternoon, he set eight discussion topics for the audience. This is the report of one group which considered the issue of double belonging.