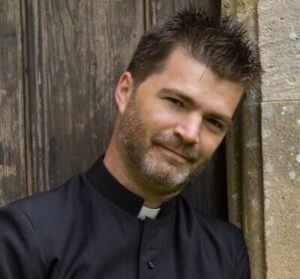 ​In this 5 minute 30 second clip, Mark Townsend, the author of 'The Gospel of Falling Down', puts forward the notion that Christianity's particular contribution to world religion is its acceptance of human brokenness and mess. It is the only religion to use a symbol of brokenness to represent divinity. And he asks why it is that the church is so often concerned with perfectionism and ends up causing pain to those who are in a mess.

This is part of a conference, led by Mark, called Seeing Jesus Again with New Eyes, which took place on May 17th 2014 at the Priory Rooms in Birmingham. Mark went on to talk about the way in which Pagans see Jesus and in particular their appreciation of the idea of Cosmic Christ and their problems with the notion of Jesus Christ. This is explained in a report on the conference, which first appeared in the June 2014 edition of Progressive Voices. We apologise for the fact that due to a problem with the recording we cannot give you the audio of more of his talk.

In the afternoon, Mark set eight discussion topics for the audience. In the Resources Audio index you will find recordings of six of the eight the rapporteurs talking about the outcomes of their group discussions. (The other two didn't use the microphone and so were not recorded).

There is also a photo-gallery of the conference