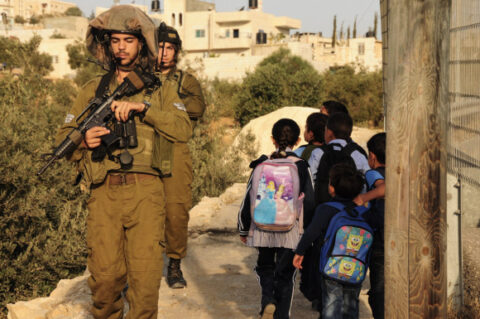 As children, parents and teachers around the world adapt to home-schooling and half-empty playgrounds, the worry of how external forces will impact their children’s education and opportunities is not a new experience for parents and teachers in the West Bank. Daily barriers can include military presence on school routes, military checkpoints and intimidation from settlers, Israeli citizens living in communities built on occupied land in the West Bank. The Palestinian Ministry of Education and Higher Education (MOEHE) estimates that more than 8,000 children and 400 teachers in the West Bank need some form of accompaniment in order to safely get to school. This usually comes from nonviolent international monitors whose visibility can act to deter soldiers from more aggressive behaviour. For some schools in the West Bank, children are required to walk past Israeli Defence Force (IDF) soldiers every day on their way to and from school making these monitors important in helping children to access education. Currently the lockdown situation has made the presence of international monitors in the West Bank more difficult. In addition to this, there is a shortage of education infrastructure due to lack of funding and building restrictions. UNICEF has reported that in Area C, which encompasses over 60% of the West Bank and is under Israeli civil and military control, 36% of residential areas lack primary schools due to building restrictions for Palestinians. Children’s right to education is protected under international law; Article 50 of the 1949 Geneva Convention IV states that, ‘The Occupying Power shall, with the cooperation of the national and local authorities, facilitate the proper working of all institutions devoted to the care and education of children.’ The rights of children to access education, and have the opportunity to develop their, ‘personality, talents and mental and physical abilities to their fullest potential…’ are further upheld in Article 29 of the 1989 United Nations Convention on the Rights of the Child. Omar describes the pressure children and young people in his area face from the regular aggression from soldiers. He describes the aftermath of a situation in 2019 when soldiers entered a primary school during the children’s lessons, leaving some students too scared to go back to school. Some parents also reported that their children had started bedwetting. In a survey of 400 children in the West Bank in some of the worst affected areas, Save the Children reported that over 40% of children stated that Israeli military or settler violence affects their ability to learn. In Nablus which has the highest recorded numbers of attacks on education in the West Bank this rose to over 80%. Discussing the impact on students of the death of one of their classmates who was shot and killed by IDF soldiers, Omar says; “I saw the grief in the students’ eyes, they were traumatised. I didn’t know what to do with the students, it’s a very painful situation to deal with kids who lose one of their classmates.” Since the lockdown, Omar says he has seen fewer occurrences of aggression from soldiers directed towards schools in his area, although across the West Bank overall there have been rises in settler violence. Now, young people face an additional challenge; how to access education from their homes. Omar says that in his area teachers are trying to find ways to provide lessons virtually through platforms like Zoom. However, this brings other challenges as many families cannot access the technical equipment needed to learn in this way. Students in their final years are worried about exams and considering postponing enrolling in further education. In an area where unemployment sits at about 18.2% with around 29.8% of those being young people, the further disruption to children’s education brought about by Covid-19 adds to the uncertainty about their future faced by young people in the West Bank. As Omar says; ‘right now we are not suffering as much from aggression but from an ambiguous future.’ Take Action! The uncertain future faced by Palestinians in the West Bank cannot be underestimated. As well as the many challenges of lockdown, the State of Israel has threatened to annex parts of the West Bank into their sovereign territory, a move which would make the injustices of occupation a permanent reality. In the UK? Please write to your MP to share your concerns about annexation. You could include information from this blog and also this public statement on annexation by EAPPI UK & Ireland and other NGOs. You could ask your MP to write to the Foreign Secretary on your behalf and ask what actions the UK government is taking to hold the Israeli government to account. Remember to include your home address in your email so they know you are a constituent. In Ireland? Please write to your TD to share your concerns about annexation. You could include information from this blog. In July, the foreign ministers of 11 EU countries including Ireland wrote to the EU asking it to publish a list of concrete actions that it will take in the event of annexation. You could applaud the Irish government for being part of this initiative, and urge them to keep the pressure up. You can find your TD’s details here. Remember to include your home address in your email so they know you are a constituent. Tu’qu, Bethlehem. When going to school, many Palestinian children face the Israeli military. Photo: EAPPI