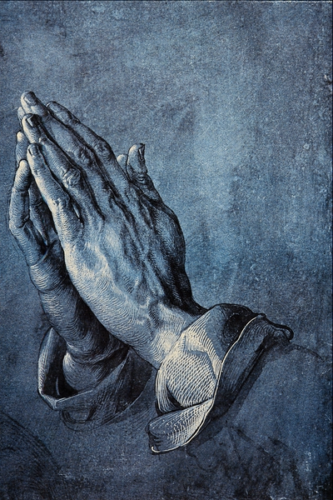 This is a summary of our conversation about prayer on 5th December 2020 via Zoom.

Seven of us met for our December meeting using Zoom. For James and Pamela Tawse it was the first time they had the equipment to join us and it was lovely to have their company.

Maureen brought with her a hymn that sums up what prayer means to her. Prayer is the soul’s sincere desire. (https://bit.ly/39JwhXJ). For her prayer is not about being in a required space or surrounded by particular trappings, but something that comes up from the depth of our being.

Hilma spoke of her difficulty leading prayer, being wary of any prescriptive jargon. She likes the approach at Iona. She read us an Iona meditation which starts:

Andy shared the transcript of an interview given by Karen Armstrong. This ends:

Prayer teaches us to use language in a different way; to thank, praise and beg pardon wholeheartedly, without holding anything back. And as we do that, we chip away at our egotism. And that, in turn, will make us a force for good to the people around us and make the world a better place – without asking God to perform a miracle. (You can find it here – although the text is strangely jumbled: https://bit.ly/2JPgqvJ )

Peter read us an Advent prayer: Do you need a house, Lord? This emphasised our offer to make ourselves the house that God is looking for, rather than a building.

Pamela spoke of feeling a spiritual force while in a time of reflection. As a nurse she would hold her patients before God and she felt this meant that she was more focused in her nursing of them afterwards. She spoke of telegraphic prayers which she directs to the Holy Spirit and the gateway to God which she finds in the Prayer of General Thanksgiving.

James spoke of moments of enlightenment that for him are the greatest expression of prayer. Whether at a time of reflection or within a more active moment, these leave him feeling content that he is in the right place; though he confessed the feeling often didn’t last very long. Hilma describes these as ‘yes moments’ which she has experienced too.

Nicky gave us two approaches. If we believe there is a divine being, then listening is surely the key. But if like her, we are more agnostic, then the key lies in being able through prayer to touch otherness, within ourselves or in others or in creation or, for that matter, in history, whether our own life story or our ancestral roots. In appreciating this relatedness we are able to find a perspective on our own existence.

She went on to say how the poetry of liturgy can be a gateway to touching the other. As can going for a walk or entering a church.

And so we found that we were on a spectrum when it comes to prayer. Some find a gateway in a particular space or poetry, others less so. As Nicky pointed out there is a distinction between a ritual and ritualism.

Andy quoted Hildegard of Bingen and a few lines from the film Shadowlands, a film about C S Lewis and his dying wife, Joy.

Hildegard described prayer as breathing in and breathing out the one breath of the universe.

Lewis: I pray because the need flows out of me all the time, waking and sleeping. It doesn’t change God, it changes me

Nicky felt both the aspects of prayer were important – becoming aware that we are one with the universe (cf Tenjo’s talk in November) and becoming changed ourselves when we express our need.

Hilma went further and said that while she can’t explain it she had experienced benefits from other people’s prayers. The first just before she was going to be ordained and at a time when she wasn’t sure about it. The second when she was seriously ill. In both cases she felt uplifted by other people’s prayer and, in the case of her ordination, was convinced to go ahead. Was she influenced by the fact that she knew others were praying for her, she asked? Possibly but still she felt it was more than that.

Finally we talked about anchor prayers - prayers which turn us to God/the Universal. These are often the prayer with which we start a period of prayer or reflection.

Peter said that one of his was simply “Help, I can’t do this on my own”

Pamela’s anchor prayer was one she was taught as a child in the Second World War:

Because I know tomorrow

I know He'll help me just the same.

Hilma found music often provided her with a gateway. Eg Taize chants; she mentioned In Manus Tuas, Pater (Into your hands, O God…)

Andy’s anchor prayer is: The heart of my heart seeks the soul of the universe

For James it is: Eternal life was in him, and that life gives light to all mankind (From John’s Gospel).

James has given us a link to the shared online services from his parish in Stroud. They can be viewed on YouTube. stroudparishchurches.org.uk/services . (It can take a while to load so be patient).