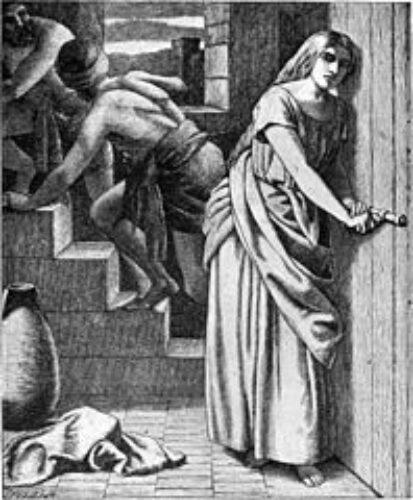 Five of us met to share thoughts around two female characters in the Old Testament, Rahab and Bathsheba, both mentioned at the start of Matthew’s Gospel in the genealogy of Jesus. Only 4 women are mentioned in the list, the rest are men, which raises the question, why these women?

Rahab, the prostitute from Jericho, protects two Israelite spies who are holed up in her city wall home. Showing some courage, she cons the king’s soldiers who are on the hunt for the spies and later helps the two Israelites to escape down a rope out of her window. In return for doing so she asks them to spare her and her family when the Israelites raze the city which they do by asking her to identify her home by tying a red cloth to the window through which the spies will escapes. It’s a story of a shrewd woman who knows the way the wind is blowing and decides it’s in her interests to help the enemy and stare down her own people. (Not sure how this would go down in Ukraine right now)

The course notes on this story suggest that being a prostitute she was an outsider and, relating to the Israelis, she clearly way. But we were not convinced that in relation to her own people she was on the fringe. She seems to be self-possessed and living an independent life – presumably unattached to a husband. (We talked about how we see prostitutes nowadays, as people carving out a life for themselves, or as people to be pitied for the exploitation they suffer. We thought both could apply.)

Despite this quibble about whether Rahab was an outsider, we agreed that people on the fringe of society often find a rather poor welcome in a church and, more important, are sometimes not respected for what they have to offer; not even asked what they have to offer. Various examples of learning from outsiders in church were provided by those present. It should be an exchange.

Bathsheba is referred to by Matthew as the Wife of Uriah, which puzzled us, since the Old Testament names her. Perhaps the reference to Uriah was an attempt to underline that David should never have been able to marry her and only did so by committing a dreadful act in having Uriah placed in fatal jeopardy. Perhaps Matthew wanted to remind us that David had feet of clay. As Emma put it, it highlights that God can create good out of a messy situation. (I have heard the ‘death of God’ theologians refer to God as the force that creates good out of human messiness.)

Was Bathsheba complicit in seducing David or was she a victim who suffered dreadfully, losing her husband, her baby and being treated as a vassal to be used by the king. Maureen felt it was the latter and we agreed.

We moved on to talk about why women make up the majority of church congregations, which hasn’t always been the case. Various theories were put forward. We agreed that women were perhaps more sociable and community minded and this is a need often met in churches, while men are more inclined to be solitary. As church became more optional a commitment, it was not surprising that men were the first to opt out, though it may be they still have a faith.

Image: Frederick Richard Pickersgill, illustrator of the 1897 Bible Pictures and What They Teach Us by Charles Foster, Public domain, via Wikimedia Commons