Notes from our October meeting 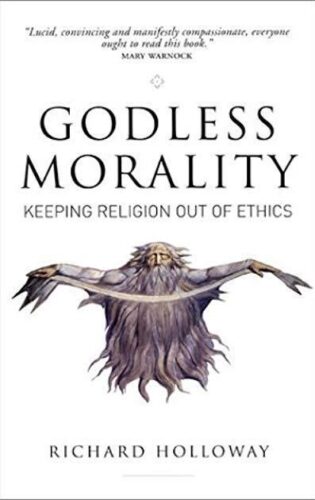 We are currently reading Godless Morality by Richard Holloway. In October Maureen Partington shared her thoughts on the introduction to the book and the first two chapters. Here are her notes and the questions she asked which kicked off the discussion. Next month we will take a look at chapters three and four.

Introduction
Do we have to be religious to be moral? Do we have to believe in God to be good?
Unbelievers point to crimes, wars, guilt & misery caused by religion
Religious leaders say Xian ethics expression of Xian doctrine - loss of belief underlies moral confusion of today (patronising)
‘Can the ethic not stand on its own as something likely to commend itself to people who want to try to live well & believe in the importance or morality for healthy human commitment?’

Distinction between ritual piety & morality –
Tradition but not universal law (Lev 18:22 re lying with males uses former word)
‘Jesus used the vocabulary of sin but he refused its identification with the breaking of external codes …Sin came from the selfish heart’

‘Morality tries to base itself on observed consequences, not on beliefs… A wrong act is one that manifestly harms others or their interests’
‘Our search for basic moral principles, if we are wise, will always allow for situational variations’
e.g man whose wife has dementia begins affair with close friend – mutual help

Good moral systems frequently compete – inescapable pluralism, so leave God out of it!

Q Do you agree we should leave God out of the debate? And can we, as Christians?

Is moral life more like playing from written score as in classical music or improvising as in jazz?

Need to praise/blame – superficially easy, complicated in fact :
Gillian Slovo - daughter of ANC leader neglected by father in greater cause. Knowledge may change verdict :
Killers of Jamie Bulger – victims of own circumstances

Believers committed to moral system as permanent will of God depend on ancient texts – must deny results of historical study of these texts, seen as inspired but not divine in origin

1. when environment changes, tradition no longer carries weight - tradition not good enough reason for obedience to prevailing moral code
2. crisis of authority – no longer imposed, must be earned by its intrinsic value

‘We must do what we can to construct moral agreements that will have the authority of our reason and the discipline of our consent.’
‘If we reject the idea of God as a micromanager of human morality… we shall have to develop a more dynamic understanding of God as one who accompanies creation in its evolving story like a pianist in a silent movie.’

Q Is morality always dependent on circumstances or are there any absolutes?

Q Should the Church agree a new sexual ethic or can it tolerate a variety of views?