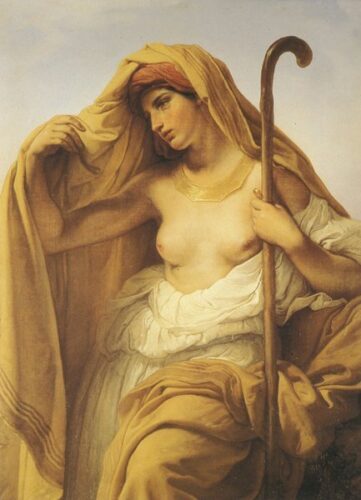 In our March 2022 meeting we began an occasional series looking at the four women who figure in the genealogy of Jesus as outlined in the opening chapter of Matthew's gospel. Each woman is at the centre of a traumatic and sometimes scandalous episode in the Old Testament. Why does the writer of Matthew include them? Today we were looking at Tamar who figures in Genesis Chapter 38.

The session was led by Maureen Partington

Maureen began by reading a poem.

Over the history of God’s people

To illuminate the dark

The promises of God

For the Messiah to come

That a new baby baby crying

Proclaims, “God is with us?”

The light has come.

Maureen then introduced us to Tamar, the first of Jesus' "unlikely grandmothers". She pointed out that this genealogy of Joseph is a construct based on the special Hebraic number 14 [or 7] It contains several important figures of history but also four women. Why they are there we will consider later.

The story of Tamar is a very sexually explicit story. It is based on the tribal concept of Levirate marriage where if a man dies childless, his widow is then given to the next unmarried brother in line. This was to protect and provide for the widow who was totally dependant on family but it was also to protect the family bloodline and inheritance. Tamar was first married to the eldest son of Judah, [Joseph’s brother]. After he died, according to custom, she was given to his next brother who deliberately prevented her becoming pregnant. He died too. According to tribal rules Judah should then have given Tamar to his youngest son Shelah. But he didn’t, perhaps out of fear that he would suffer the same fate. He used the excuse that he was too young and sent Tamar home to her father as a widow. Shelah grew up and still Tamar was left languishing in her father’s house as a widow. She took matters into her own hands. Dressed as a prostitute, she tricked her father-in-law Judah into sleeping with her and into giving her a pledged token as proof. She used the only weapons she had, her body and and her cunning. When she became pregnant, Judah, who had abrogated his duty as father-in-law, now set himself up as patriarchal judge finding her guilty of bringing shame on his family. Only as she received the death sentence did she reveal the identity of the father of her twin sons. At the climax of the narrative, Judah admitted his guilt and publicly acknowledged Tamar’s “righteousness”.

I don’t think many of us were too shocked but surprised perhaps at the explicit detail of the story. On the whole most comments supported Tamar in her search for justice and her courage in making it happen. Judah although he had behaved badly got some credit for admitting his fault and justifying her deceptive actions. The question was raised as to whether Judah acted out of remorse or out of seeing an advantage in having an heir. We realised that we can’t judge the morality of the story from our own perspective. Tribal honour was important in nomadic communities. As to who had the power in the story, in a patriarchal society it seemed to lie completely in the hands of men. It seemed as if Tamar had no power, being passed around by the men in the story as a mere possession. In the end though she cleverly used the power she had to get what she wanted.

God is not really explicitly mentioned in this story. Someone mentioned he was given responsibility for striking down Judah’ sons. It was pointed out that in the Old Testament God had to be responsible for everything that happened good and bad. The comment was made that God was implicit in all the Genesis stories which were written down much later not as pure historical fact but as “revelation history” trying to show that nothing would thwart God’s ultimate plan for his people.

We discussed equality in the workplace which still has a long way to go even in more developed societies. The comment was made that the church itself has lagged behind the rest of society in supporting women. Many still have problems with women in positions of authority. In the past fixed gender roles in families were the norm. Today we think, from our experience of our own children and grandchildren, that it is more common for roles in families to be more fluid.

We discussed what we understand by “power.” Although tied to a role, many women have held a great deal of power in the home, especially in the North. They have held the purse strings, even giving their husbands set pocket money to spend. Women in positions of power can abuse it just as much as men.

In some ethnic communities women seem to have little say. Things aren’t always as they seem. One Muslim woman said that their father made all the big decisions like buying a house, but that mother made all the important day to day ones.

Are some of the gender responses we make innate? We can find ourselves automatically assuming importance based on gender, by how we greet people, or presume their competence. Women seem to find it easier to share feelings and get support in sorority groups. Is this innate?

We had various ideas about this – She stood for justice, she helped to further God’s plan? The genealogy list is inclusive, with foreigners and women listed. Is this setting out the new gospel agenda?

We thanked Maureen for finding this interesting topic and for leading us and we thanked Andy for organising us again.