February 2020 - talk by Mark Hutchinson, Unitarian minister for the Cotswolds 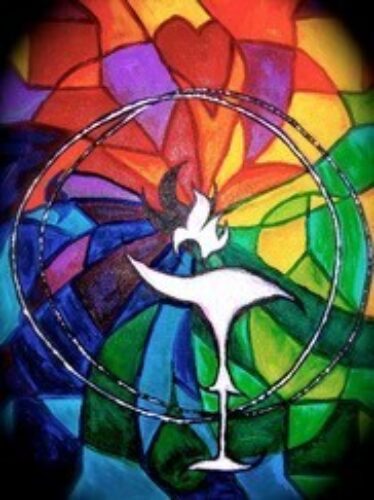 Mark opened with two stories of people who levitated. One, a priest, gained sainthood for his skill and is today a patron saint of flying, St Joseph of Cupertino. The other is a less sweet levitator who entertained the public in London and who fell from grace in some kind of scandal. He is forgotten today. Mark didn’t tell us what to take from this disparity of recognition except that, regardless of what you think of levitation, these men were both experts and if you wish to understand levitation, they could both be helpful. I am reminded of the PCN 8 points No 2:

“We affirm that there are many ways to experience the Sacred and that we can draw on diverse sources of wisdom on our spiritual journeys.”

Mark told us that within his ‘parish’ the two main congregations are Evesham and Cheltenham. There are smaller congregations in Cirencester and Gloucester. The character of the Evesham congregation he describes as liberal Christian. The Cheltenham congregation he said was largely atheist, drawing on a range of spiritual resources, including the Neopagan Wheel of the Year, which emphasises our links to the Earth through the changing seasons.
The point here is that for Unitarians there is no creed and not even a particular religious narrative to believe. Mark sees his job as helping people to grow along their chosen spiritual path and to find their own truth and meaning.

The name, Unitarian, was coined to describe the rejection the Trinity and in particular the notion that Jesus is God. The idea first surfaced in Europe in the 16th Century, though the priest concerned was martyred for his view. The Enlightenment allowed Unitarianism to grow in an atmosphere that favoured freedom of conscience and intellectual reason. In America, Unitarianism was closely related to the Transcendentalism of people like Thoreau and Emerson.

Mark referred us to a number of books which he has found useful*. In particular a book by the senior Unitarian pastor in New York, Galen Guengerich, called God Revised: How religion must evolve in a scientific age. The book introduces the idea that while God is not a guy in the sky - that doesn’t mean there can be no experience of God.

Since taking up his post a year ago Mark has undertaken a number of initiatives. One is to try to set up a new centre for spiritual activism in Malvern, called Indigo. The aim is to offer spiritual and practical support to anyone on the front line of trying to make the world a better place, without requiring any religious belief. In this project he is working alongside a PCN member, Andrew Webb, who co-founded PCN Malvern. A key point about this initiative is that it is not aimed at the disenchanted church alumni but at those who would never think to visit a church in the first place.
The Gloucester meetings of the Unitarians take place on the second Sunday of each month at the Barnwood Reading Room starting at 3pm. There are refreshments afterwards.
Website for Cheltenham and Gloucester: https://www.cheltenhamandgloucesterunitarians.org.uk/
Mark read out to us a set of seven principles from American Unitarians which encompass the ‘non-creed’ of their church. They are listed below. The image is the ‘the flame in a chalice’ which is the Unitarian symbol.

Principle 1: The inherent worth and dignity of every person;
Principle 2: Justice, equity and compassion in human relations;
Principle 3: Acceptance of one another and encouragement to spiritual growth in our congregations;
Principle 4: A free and responsible search for truth and meaning;
Principle 5: The right of conscience and the use of the democratic process within our congregations and in society at large;
Principle 6: The goal of world community with peace, liberty, and justice for all;
Principle 7: Respect for the interdependent web of all existence of which we are a part.

* Books that Mark has found useful in his own spiritual journey
Richard Robe: The Divine Dance: The Trinity and your transformation
Galen Guengerich: God Revised: How religion must evolve in a scientific age
Rupert Sheldrake: The Science Delusion
Joanna Macy & Chris Johnstone: Active Hope: How to Face the Mess We’re in without Going Crazy
Marcus Borg (editor): Jesus and Buddha: The Parallel Sayings
Chung-yuan Chang: Tao: A New Way of Thinking;
Julian Baggini: How the World Thinks: A Global History of Philosophy
Unitarian Association: Lifting our Voices - Readings in the Living Tradition.