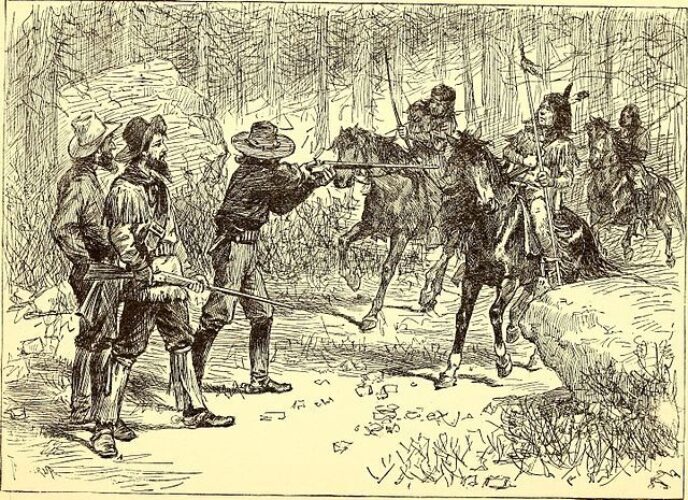 Our subject for November 2021 was borderlands – those times and places in our lives where national or cultural boundaries intersect and we find ourselves coming from one side or the other or else caught in the middle.

Nicky von Benzon introduced the subject by referring to a group walk along the Offa’s Dyke path that she had led earlier this year where she followed a frontier which had historically witnessed both mutual exchange and conflict, trade and death.

Frontiers bring to mind the importance of place and identity. People living on this border, although Saxon or British, were quite often a cultural mix of the two.

Nicky spoke of other borderlands she had encountered:

Others then spoke of their own experience of living in borderlands. We heard from C about living among native cultures in sub-Saharan Africa – an experience which led to mutual respect. We also learned of the poisoned relations between white masters and black majorities. P told us that in Algeria he found that accepting the Muslim practice of marrying off young girls was sometimes the price for allowing European led schools to stay open.

We heard about encounters across the divide of social class – J mentioned being mocked by working class colleagues for having a privileged background. Yet sometimes these relationships ripened into valued friendship. When the class divide happens between generations within a family, as in J’s case, we sometimes find ourselves asking, ‘Who am I really’.

We heard about religious borders – Catholic/Anglican, Anglican/Methodist, Methodist/Quaker – where often the challenge is being called ‘not really Christian’. Sometimes the key to managing the divide is to accept the religious vocabulary used by the other. Another compromise, in M’s case, was to accept wearing robes in order to become an Anglican reader despite finding this alien due to her primitive Methodist roots.

A further boundary that P had experienced was the divide between volunteers and professionals in the medical and teaching worlds.

Nicky said that Biblical narratives encourage us to see borders as places that make it possible to connect to our roots and give more meaning to life. Such encounters pull back veils to reveal a deeper truth. The act of reaching across a divide allows us to do this. She quoted the story of Ruth who although a Moabite decided to accompany her Judean mother-in-law to Bethlehem after their men folk had all died. “Wherever you go I will go... your God will be my God’. The Bible shows us that God is often portrayed as the God of outsiders, those who find themselves in borderlands. Jesus frequently bridges the divides of social, racial and religious borders. The Samaritan woman for example – a divorcee, a Samaritan and a woman – making her a cultural outsider.

Nicky went on to talk about thin places where we are taken beyond ourselves to meet the divine in the well springs of truth, spiritual growth and mutual understanding. We should try to be open and vulnerable and to share our uncertainty with those who are willing to meet us in such places.

J agreed Jesus was interested in breaking down borders unlike the Church which has so often built up borders, especially in its use of language which is often at the heart of difference. Others spoke of Iona and Taize as being thin places where barriers are broken down as diverse peoples journey together sharing their stories and making powerful new connections. P said two key words were ‘listening’ and ‘respect’.

J thought that the story of Phillip and the Ethiopian Eunuch was a good example of reaching out across a religious red line. Eunuchs were not allowed in the temple such was their poor status in Judaism, yet Phillip baptised him. (It was commented that the fact that he was black was not seen as being of importance – skin colour is a relatively new border)

Both stories – Ruth and the Eunuch are conversion stories. Yet ‘A’ wondered how to approach a border if you were not necessarily looking to change your own or another’s identity. Nicky and J felt that Paul was a good example when he preached in Athens. He did not tell the Athenians they were wrong but he offers them an expansion of their world view.