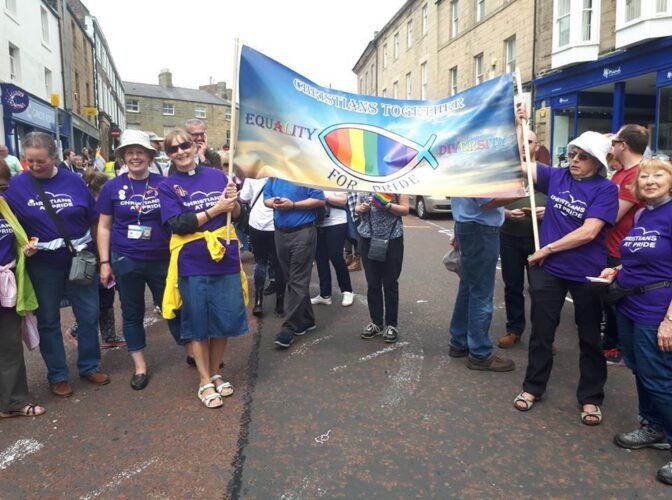 CHRISTIANS TOGETHER AT NORTHUMBERLAND PRIDE

Two members of PCN Newcastle joined with clergy and laypeople from two denominations and worked together to create a place of prayer at Northumberland Pride, held in Alnwick on Saturday 2nd June. The day was about celebrating inclusivity and diversity with music and dancing, fun, food and learning. There was a march from the Market Cross to the Rugby Club where groups with banners followed The Banshies, an energetic drumming group. The whole event was colourful and noisy and the Christian at Pride team wore their purple tee-shirts. The many stalls were staffed by people from the NHS, Age UK, the Police, care for cats and dogs, adoption and fostering, and support groups for those with mental health issues, drug addiction, cancer awareness, St John’s Ambulance, the national Education Union, Unison and the list could go on.
The Place of Prayer area proved very popular. There were some amazing conversations. The volunteers gave people cards with words like ‘God loves Style’, ‘You are God’s Work of Art’ and ‘Be Yourself’. One burly security guard took the card ‘You are Blessed’. When asked if anyone had told him he was blessed he replied that no-one ever had. It was noticed that the card was in his shirt pocket at the end of the day!
People of all ages came to the tent to weave a ribbon in the prayer wheel as a symbol of the desire to build a new creation where all are blessed, all are welcomed. So many lovely people came to the table. One person commented that it was so peaceful just to stand and weave her ribbon into the wheel. Another person, who claimed to be an agnostic, spoke tenderly about a loved one who had died recently as the action of weaving a golden piece of wire into the wheel was carried out.
On the Tuesday before the event a church service was held at St James URC Church in Alnwick. This was also well attended and someone commented, ‘I don’t do religion but this service was so LGBT+ centred and the people were lovely….’
It was a wonderful and moving day, blessed with good weather and a fantastic body of people.

Smells about right, huh? Hellen's work in progress so far