A miscellany of poetry and readings, November 14th 2017 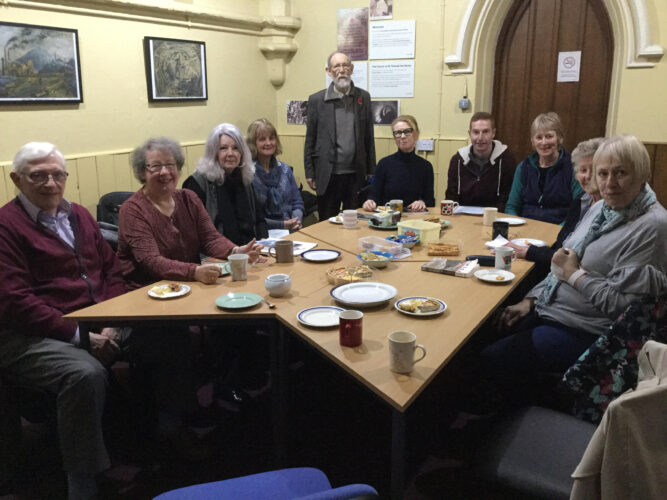 Though wise men at their end know dark is right,
Because their words had forked no lightning they
Do not go gentle into that good night.

Good men, the last wave by, crying how bright
Their frail deeds might have danced in a green bay,
Rage, rage against the dying of the light.

Wild men who caught and sang the sun in flight,
And learn, too late, they grieved it on its way,
Do not go gentle into that good night.

Grave men, near death, who see with blinding sight
Blind eyes could blaze like meteors and be gay,
Rage, rage against the dying of the light.

And you, my father, there on the sad height,
Curse, bless, me now with your fierce tears, I pray.
Do not go gentle into that good night.
Rage, rage against the dying of the light.

Val’s choice
Remember Me
Duty called and I went to war
Though I’d never fired a gun before
I paid the price for your new day
As all my dreams were blown away
Remember me
We all stood true as whistles blew
And faced the shell and stench of Hell
Now battle’s done, there is no sound
Our bones decay beneath the ground
We cannot see, or smell, or hear
There is no death, or hope or fear
Remember me
Once we, like you, would laugh and talk
And run and walk and do the things that you all do
But now we lie in rows so neat
Beneath the soil, beneath your feet
Remember me
In mud and gore and the blood of war
We fought and fell and move no more
Remember me, I am not dead
I’m just a voice within your head
by Harry Riley

Jean’s choice
Thirteen Steps and the Thirteenth of March

She sat up on her pillows, receiving guests.
I brought them tea or sherry like a butler,
Up and down the thirteen steps from my pantry.
I was running out of vases.

More than one visitor came down, and said,
‘Her room’s so cheerful. She isn’t afraid.’
Even the cyclamen and lilies were listening,
Their trusty tributes holding off the real.

Doorbells, shopping, laundry, post and callers,
And twenty-six steps up the stairs
From door to bed, two times thirteen’s
Unlucky numeral in my high house.

And visitors, three, four, five times a day;
My wept exhaustions over plates and cups
Drained my self-pity in these days of grief
Before the grief. Flowers, and no vases left.

Tea, sherry, biscuits, cake and whisky for the weak…
She fought death with an understated mischief—
‘I suppose I’ll have to make an effort’—
Turning down the painkillers for lucidity.

Some sat downstairs with a hankie
Nursing a little cry before going up to her.
They came back with their fears of dying amended.
‘Her room’s so cheerful. She isn’t afraid.’

Each day was duty round the clock.
Our kissing conversations kept me going,
Those times together with the phone switched off,
Remembering our lives by candlelight.

John and Stuart brought their pictures round,
A travelling exhibition. Dying,
She thumbed down some, nodded at others,
An artist and curator to the last,

Honesty at all costs. She drew up lists,
Bequests, gave things away. It tore my heart out.
Her friends assisted at this tidying
In a conspiracy of women.

Sad? Yes. But it was beautiful also.
There was a stillness in the world. Time was out
Walking his dog by the low walls and privet.
There was anonymity in words and music.

She wanted me to wear her wedding ring.
It wouldn’t fit even my little finger.
It jammed on the knuckle. I knew why.
Her fingers dwindled and her rings slipped off.

After the funeral, I had them to tea and sherry
At the Newland Park. They said it was thoughtful.
I thought it was ironic—one last time—
A mad reprisal for their loyalty.

The real aim is not to see God in all things, it is that God, through us, should see the things that we see.
- Simone Weil

I took God with me to the sheep fair. I said, ‘Look
there’s Liv, sitting on the wall, waiting;
these are pens, these are sheep,
this is their shit we are walking in, this is their fear.
See that man over there, stepping along the low walls
between pens, eyes always watching,
mouth always talking, he is the auctioneer.
That is the wind in the ash trees above, that is sun
splashing us with running light and dark.
Those men over there, the ones with their faces sealed,
are buying or selling. Beyond in the ring
where the beasts pour in, huddle and rush,
the hoggets are auctioned in lots.
And that woman with the ruddy face and the home-cut hair
and a new child on her arm, that is how it is to be woman
with the milk running, sitting on wooden boards
in this shit-milky place of animals and birth and death
as the bidding rises and falls.’

Then I went back outside and found Fintan.
I showed God his hand as he sat on the rails,
how he let it trail down and his fingers played
in the curly back of an ewe. Fintan’s a sheep-man
he’s deep into sheep, though it’s cattle he keeps now,
for sound commercial reasons.
‘Feel that,’ I said,
‘feel with my heart the force in that hand
that’s twining her wool as he talks.’
Then I went with Fintan and Liv to Refreshments,
I let God sip tea, boiling hot, from a cup,
and I lent God my fingers to feel how they burned
when I tripped on a stone and it slopped.
‘This is hurt,’ I said, ‘there’ll be more.’
And the morning wore on and then sun climbed
and God felt how it is when I stand too long,
how the sickness rises, how the muscles burn.

Later, at the back end of the afternoon,
I went down to swim in the green slide of river,
I worked my way under the bridge, against the current,
then I showed how it is to turn onto your back
with, above you and a long way up, two gossiping pigeons,
and a clump of valerian, holding itself to the sky.
I remarked on the stone arch as I drifted through it,
how it dapples with sunlight from the water,
how the bridge hunkers down, crouching low in its tracks
and roars when a lorry drives over.

And later again, in the kitchen,
wrung out, at day’s ending, and empty,
I showed how it feels
to undo yourself,
to dissolve, and grow age-old, nameless:

Pat’s choice.
The Other by Ruth Fainlight
Whatever I find if I search I am wrong.
I must wait: sternest trial of all, to sit
Passive, receptive, and patient, empty
Of all demand and desire, until
That other, that being I never would have found
Though I spent my whole life in the quest, will step
From the shadows, approach like a wild ackward child.

And this will be the longest task: to attend,
To open myself. To still my energy
Is harder than to use it in any cause.
Yet surely she will only be revealed
By pushing against the grain of my nature
That always yearns for choice. I feel it painful
And strong as a birth in which there is no pause.

There are two more verses but I think the poem is under copyright. You can hear the poem being read but I couldn’t find a printable copy. I suggest if you want to read or hear it all you go on line.

Joyce chose to read from the last chapter of Richard Rohr’s book, ‘The Divine Dance’.

Val also read a transcript from a World Service programme about remembrance.

Smells about right, huh? Hellen's work in progress so far