‘How to be a bad Christian and a better human being’ 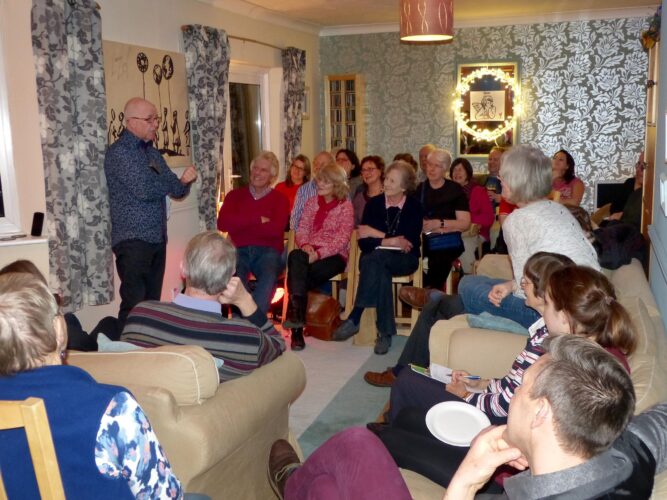 On the evening of Friday April 4, 39 people fitted amazingly in a transformed sitting room of one of our Newbury PCN group members to hear Dave Tomlinson speak. Our hosts, Gary and Rachel, had known Dave and his wife Pat for many years and wanted to introduce him to us all at this special meeting of our PCN group. Working in North London, Dave is an Anglican vicar with a difference, and the talk was based on his recent bestselling book ‘How to be a bad Christian and a better human being’.

Dave grew up in the Brethren Church, but never vibed with it. Then in the 1960s and 70s the House Church Movement came along. ‘Someone said it was of the devil – so that was good enough for me!’ Dave became a leader and spent many years working and travelling with the House Church movement. But he said he never found out ‘who he was’ and eventually jumped ship, which was a huge change and a financial challenge at that time. He was looking for authenticity, had a desire to help people make sense of faith in their every day lives. ‘People are no less spiritual than in past ages, under all sorts of banners. But there is a real disconnect with formal religion’. He was looking for creative ways to plug into peoples lives and nourish their soul.

In the 1990s Dave started ‘Holy Jo’s’, a gathering in a room above a pub, where people could come and express their questions and doubts. It was a place of refuge and somewhere people could feel empowered. As a result of this work he wrote his first book, ‘The Post Evangelical’. At that time he did a lot of soul searching into what he actually believed, which made his wife Pat (who has a less head and more gut approach to life) comment: ‘When you have decided what we believe, let me know!’

Dave is now a vicar at St. Luke’s in North London. He feels at home in the broad church that C. of E. is, grounded in a community where he finds people that are ‘the salt of the earth’. ‘My best times have been with people outside the church. In the end it is all about kindness and love’.

Christians are people ‘of the Way’ and many don’t know that they are on it. Think of Christianity as a verb rather than a noun. And let’s ignore the labels and look at people’s hearts. Jesus spoke to people’s hearts. He spoke of God’s Kingdom – a metaphor of a different consciousness. Epiphany moments are like waking up to this. Let’s be authentic to ourselves. Let’s help people to grow in spiritual intelligence. Let’s value the kindness people show and realise the divine presence in all that.

After a searching Q&A time, some more lovely snacks and nibbles, social chat and book signing, we went home with plenty to mull over!

“As ‘Progressive’ Christians’, can we identify a message about God that is…