Beyond the Dysfunctional Family - interfaith dialogue 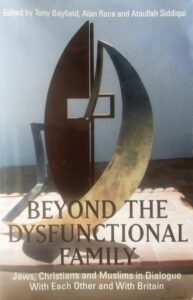 Jews, Christians and Muslims represent more than 50% of the world’s population. This book makes the case that if religion is not to be dismissed as the dying relic of bygone age, then these three groups must discover the secret of respectful co-existence. The writers started their dialogue in the knowledge that they are from sibling faiths, having a prophetic, ethical monotheism in common. Jews talk of repairing the world, Christians talk of building the kingdom of God, and Muslims talk of creating a just world. The authors argue that differences should be recognised and respected without claiming superiority. Yet superiority is ingrained in religious texts – consider the implication for Jews of the Christian doctrine of the New Covenant. For this reason dialogue is inevitably a progressive exercise; scriptures should not be used in a simplistic way; they need careful interpretation bearing in mind their historical context and their relevance to present needs.

This book is out of stock, copies may be available on Amazon or from other book sellers.