Wounded Shepherd: Pope Francis and His Struggle to Convert the Catholic Church. 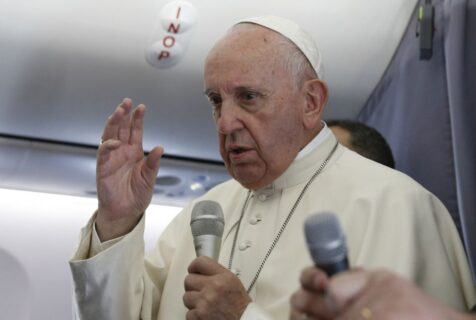 Austen Ivereigh, former Tablet editor has said “Catholics are with the pope. That used to be the traditional understanding,” Ivereigh said. But that understanding has been challenged. He noted there is “a struggle going on. This pontificate is a place of spiritual combat.” Ivereigh has pointed to a well-funded opposition fighting his agenda which is emphasizing concerns such as the environment and welcoming migrants. Ivereigh’s book is titled Wounded Shepherd: Pope Francis and His Struggle to Convert the Catholic Church. Francis’ critics, said Ivereigh, fight his call to conversion of the church. During the October Synod of the Amazon, there was virulent opposition from some American and European Catholics. The Synod was marked by Catholics in the Amazon region who called for allowing for married clergy and women serving as deacons. Francis has generated resistance since the beginning of his papacy, said Ivereigh, particularly via symbolic actions that rankled his critics. It began with his washing the feet of a young Muslim woman in a Holy Thursday ritual; his outreach to Muslims, and his openness to the LGBT community, including his recent meeting with Jesuit Fr. James Martin, a frequent target of those opposed to including LGBT people in the church. Ivereigh believes the roots of Francis’ approach to the papacy lies in the role that he played as a leader in the Latin American church, the region of the world, said Ivereigh, where Vatican II has been taken most seriously.