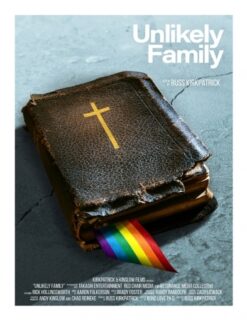 UNLIKELY FAMILY tells the heartwarming story of a church in the heart of America’s “bible belt” that decided to throw off the shackles of guilt, shame and fear

Andy Kinslow and Russ Kirkpatrick have produced a feature length documentary on the first 20 years of the St. Jerome Parish in Tulsa, Oklahoma in the United States. The film, Unlikely Family, is now streaming on Amazon in the UK. It is showing on Amazon channels in the United States, Great Britain, and multiple other territories, including Canada, Australia, and the Philippines. This inspiring story (See synopsis below) about how The Parish Church of St. Jerome was started, and its first 20 years, was produced as part of the 20th anniversary of the church. The version that was shown at theaters and film festivals was the “Director’s Cut.” When California Pictures picked it up for distribution it was re-edited to make it more appealing for an international audience. The main difference is more interviews with religious scholars. Follow this Unlikely Family as it challenges the archaic ideology that being openly gay — and Christian — is incompatible.

A compelling and thought provoking feature documentary, UNLIKELY FAMILY tells the heartwarming story of a church in the heart of America’s “bible belt” that decided to throw off the shackles of guilt, shame and fear carried in the shadows of the faith community to not only create a place where they are finally free to worship together in the open, but also serve as a beacon of hope to those who share their gut-wrenching experiences of attempting to draw near to a loving God in religious organizations where soul quenching compassion is too often so difficult to find. By displaying “unlikely strength” to bring to fruition their “unlikely idea” in one of the most “unlikely places,” UNLIKELY FAMILY does not allow even the most conservative religious zealots the opportunity to ignore the “unlikely faith” of a group of “unlikely disciples,” nor the “unlikely triumph” they have achieved.

You can watch the theatrical version of the film now on Amazon Prime: https://amzn.to/39CWQKl

If you don’t have Amazon, you can stream it on Vimeo: https://bit.ly/2WRiZlp