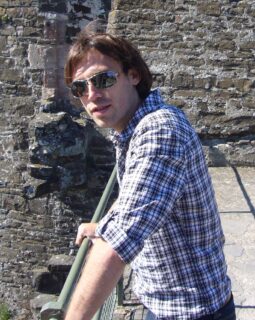 We have been informed that one of our members, James Quinton, died just over a week ago, at the age of 34.

James joined PCN 2009 and immediately took an active interest in our activities. He wrote a impressive article for the June 2010 Newsletter, (featured on the front page), which appealed for progressive Christians not to abandon a theistic view of God. In the article he expressed the wish to see a new version of the bible with progressive footnotes indicating what was meant as metaphor. He tried to set up a PCN group in his home town of Lakenheath and offered to get involved in making PCN more accessible to young people.

James is best known as a poet and author. He founded and co-edited a respected literary magazine called Open Wide which publishes twice a year. He wrote two novels one of which was called The Victorian Time Traveller which he described as a progressive Christian book. It is a science fiction story which takes the reader to the end of the twenty-first century which he portrayed as universally anti-theist. He used the novel to appeal for open thinking and contemporary understanding about faith.

My personal memories of James were his encouraging emails. He was greatly looking forward to the new website (to be launched next month) which will give groups more space to share their activities.

He wrote, “Yes, each group having their own piece of cyberspace will probably help bring our world together; it would be nice if there was more camaraderie! I’d certainly be interested in nosing at what other people in the Network are doing!”

James was full of ideas for PCN and it is a tribute to their worth that many of them are now official PCN targets.

• He was anxious to see the website deal with the big issues of faith. I am sorry he will not see new blog section which will be carrying articles of this kind from November

• He was keen to see PCN offer enquirers a list of good progressive Christian books to read. Such an offering is now part of our three year strategy (I would love to receive your suggestions, by the way).

• He encouraged us to post audio clips of conference recordings on to YouTube and to make links available on our site. We did this with the last Spong conference and are planning to make more use of YouTube links in future.

Everyone at PCN who had dealings with James has been shocked to read of his death. PCN has lost a potential mover and shaker. We send our deepest sympathies to his widow, Amy.