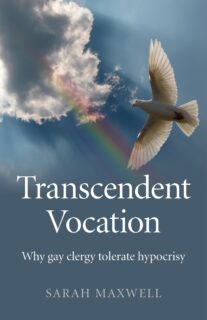 This book is based on interviews with gay clergy within the Church of England, who speak of their beliefs and their experiences at the hands of the church authorities. Further data comes from interviews with non-gay clergy, now retired, who have witnessed the years from 1967 – 2007 in which the secular world has given gay people so many more equal rights. The author concludes that the Church of England has shown ever growing subterfuge in its attempt to maintain the unequal treatment of gay priests. At the same time she discovers a remarkable devotion from gay clergy who put up with all manner of discrimination in order to fulfil their vocation. Further details plus endorsements from, amongst others, Jeffrey John and Diarmaid MacCulloch can be found on the publisher’s website: http://www.christian-alternative.com/books/transcendent-vocation

In addition, it is possible to "look inside" the book on Amazon.