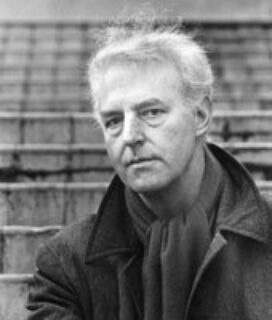 The Bible had been rolled away,

The Holy Name of Jesus lay

A stranger stood beside the door.

“You will not find him here,” he said

“This is the dwelling of the dead.

You put him in a holy box

But he has shattered all the locks.

By Christ or any other name

The shape of truth would be the same."

I woke, and it was eight o’clock.

I heard the crowing of a cock,

I heard the tolling of a bell.

The church was standing: all was well,

I knew the Bible, thick and black,

Was safe upon the eagle’s back.

How could Jesus be the same

If he had another name?

Holy, holy is the box.

Nobody can break the locks.

In 1974, under their Galliard imprint, Holy Box was published by Stainer and Bell in a compendium of Carter's poems called The Two-Way Clock SBN: 85249 287 1. The image of Sydney Carter comes from their website. http://www.stainer.co.uk/carter.html