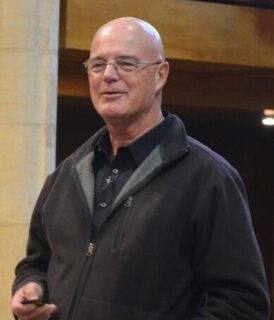 McLaren’s first engagement was with Premier Radio followed by a book launch in London with his publisher. The next day, Saturday 8th, PCN took over his schedule beginning with a day long conference at the Oasis Centre in London, where Steve Chalke is pastor. The conference ended with an evening of conversation between the two men.

On Sunday 9th October, McLaren departed for Exeter addressing an audience at the Mint Methodist Church in the afternoon, followed by talk at Exeter Cathedral during their Holy Ground service. Monday saw McLaren make his way to Cardiff where he spoke to students in the afternoon and at the City URC in the evening. On Tuesday he spoke in Birmingham at St Martin in the Bull Ring, and on Wednesday, he flew to Glasgow for a session at St Columba's Parish Church in Largs.

On Thursday 13th, McLaren flew back to Manchester for an evening in the Cathedral followed on Friday by a talk at St Thomas the Martyr in Newcastle. This exhausting tour ended in Harrogate with a full day conference at St Mark's Church on Saturday 15th October.

PCN Britain is hugely grateful to Brian McLaren for allowing us to launch him on such a wide-ranging yet compact tour. Over a thousand people bought tickets to hear him and we estimate his total audience for the tour would have been close to 1,300. This is the best audience that PCN has garnered for a tour of this kind and his influence with the UK is bound to have grown as a result.

PCN is also very grateful to its trustees, Richard Gray and Paul Onslow, who organised the tour with enormous dedication. Together with Chris Vermeulen in Scotland, they also hosted the tour and escorted Brian to the venues. Our thanks also to the PCN convenors, trustees and others who undertook the important organisation on the ground at each venue and to the churches and cathedrals which collaborated with us so enthusiastically.

Finally, a special thank you to our administrator, Sarah Guilfoyle, whose hard work ensured that the logistics, from ticket sales to hotel bookings, went smoothly.

We are preparing to publish a recording of the first conference, at the Oasis Centre. The video/DVD will be available from this website. If you wish to be notified when it is available, please send your email address to info@pcnbritain.org.uk.

We are collecting photos of the tour and they can be viewed here. If you have more snaps and are willing to share them publicly, please send them to the website editor, Andy Vivian

If you attended the tour, we’d also value your comments. Please feel free to add them below or else send your feedback to Sarah Guilfoyle