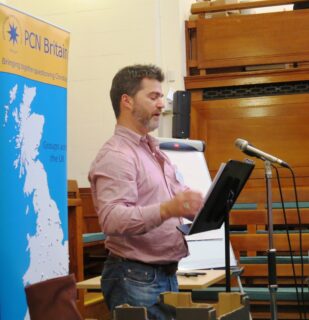 Can Christians learn from the way others see them? At a recent PCN conference, Mark Townsend, author of Jesus Through Pagan Eyes, suggested that his progressive Christian audience could learn from the insights of the New Druidism.

A link to download the written material that Mark provided to delegates is to be found at the bottom of this article. You can hear a clip of Mark's talk and reports from the discussion groups in the Resources Audio section. There are photos of the conference for viewing too. This article first appeared in the June 2014 edition of Progressive Voices. To order a copy of Progressive Voices please contact the PCN office

Nearly 70 people gathered at the Priory Rooms in Birmingham on Saturday 17th May to hear Mark Townsend, a former Anglican priest and founder of Hedge Church, talk on the theme, Seeing Jesus Again with New Eyes.

Mark Townsend's first book was called the Gospel of Falling Down, and it was evident from his opening session that he’s done quite a bit of falling down. While he was a young clergyman he had a nervous breakdown and launched into an affair with a parishioner. Afterwards, he confessed to his Bishop who told him to resign for a period of three years. To make ends meet he took a job as a cleaner. No longer a servant of the church, he explored the spirituality of the new Druidic movement. He made many Pagan friends and found much to inspire him as a progressive Christian. What marks them out from us though, he says, is that Pagans leave room for mystery and enchantment. That’s something he commonly finds missing in progressive Christianity.

He told us he’d made a study of how Jesus is seen through Pagan Eyes, (see note 1). He approached sixteen leading writers in the Pagan world and asked them what they thought of Jesus Christ. He was surprised to find that they had a very positive view of Jesus the man and were at ease with the idea of Christ. Where they took issue with Christianity was the exclusivity implied in the formula, ‘Jesus Christ’. Pagans see Christ as the whole process of cosmic revelation. For them it could never be just about one man. At this point, Mark pointed us towards two progressive Christian writers who appear to be on the same wavelength as the Druids - Matthew Fox who speaks of the cosmic Christ, (see note 2) and Richard Rohr who wrote, “We spent nearly two thousand years worshipping it [cosmic Christ] in Jesus instead of discovering it in ourselves”, (see note 3).

Mark said Christians need to keep in mind how the myth of Jesus Christ was invented by the early church. By literalising the myth, it has become more difficult to appreciate the remarkable inspiration of Jesus the man who was so daring and courageous. He lifted up the spat on and shut out, the women, drunks, prostitutes and children. It cost him his life. All of which brought Mark back to the point he was trying to make by giving the illustration of his own messy life. Why, he asked, are church leaders so preoccupied with purity and perfectionism when it is evident that Jesus himself rejected the purity codes and religious meritocracy of his own time? And why are liberals uncomfortable with the idea of the cosmic Christ bringing a magical enchantment to our messy lives?

In the afternoon, we divided into groups to discuss a range of topics suggested by Mark. Groups reported back at a final plenary and Mark addressed some of the questions raised by delegates. The conference ended with all the delegates sticking their name badges to PCN’s map of Britain followed by a Celtic and a Druidic blessing.