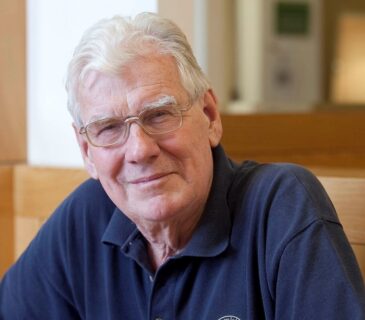 On 9th March the Rugby PCN group met to share our memories of our friend David Charles Edwards and to think of his family following his sudden death from heart failure on 6th March. We will miss his presence greatly. David had been one of the founding members of our group in 2004 and a driving force in publicising its ethos to the wider community and contributing to the programme. David influenced and supported many people in their spiritual and life journeys and we felt we wanted to share our knowledge of his own journey with the wider PCN community as a tribute to him. Born in 1938, David was rooted in Anglicanism, brought up in St Martin in the fields, where his father, Revd Mervyn Charles-Edwards was at one time vicar, moving eventually to Hartlebury Castle when Mervyn became Bishop of Worcester. At Cambridge University in the 1960’s, David’s own theological convictions were greatly influenced by conversations with his father’s friend, Charles Raven, also Bishop John Robinson and Harry Williams CR. Married with a young daughter, David was ordained as a Deacon in the Church of England, but after losing his wife to cancer he had a crisis of faith and decided not to proceed with ordination to the priesthood. Instead he immersed himself in Health Care Personnel management in the Oxford Hospitals. In Oxford he met Alison, Matron of a local hospice, who was to become his second wife. Appointed Director of the British Association of Counselling, they moved to Rugby where they both became practising marriage guidance counsellors, and had two sons. With his joy of his new extended family, and impressed by the open liberal theology in the Rugby Team Ministry, he felt a renewed vocation and was priested in Coventry Cathedral in the 1980s, serving for a time as Vicar at Clifton–upon-Dunsmore. He continued to work in counselling and mediation both within the church and outside it. David loved a good discussion, and had the gift of being challenging whilst also showing a warm tolerance for opposing viewpoints. “Unity in diversity” was his mantra and he did not seek to impose his views, but experience taught him that aspects of Christian doctrine were a stumbling block for many and he sought to give space for questions and dialogue in his ministry. While acknowledging that traditional Christian teaching was important to the faith of others, David wanted to make known the scholarship that enabled different understandings about the meaning of the Life and Death and teachings of Jesus and the nature of God. Parish magazine articles, sermons and groups opened up thinking and discussion around the Christmas and Easter narratives, redemption and atonement, and claims for Christianity. David’s biblical understanding also led him to support the ordination of women and oppose official church teaching on homosexuality in sermons and letters to the Guardian. The Church appears to have become narrower in recent years and David was certain he wouldn’t be selected for ordination now, a tragic state of affairs for those seeking to ‘live the questions’. David passionately believed faith and life were intertwined and he cared deeply about social justice and our stewardship of the environment upon which all life depends. Climate change featured in sermons and many discussions inside and outside of Church, being a keen birdwatcher he loved the natural world and was well informed about the science. Commitment to positive change led to engagement with politics and charities including Practical Action and Emmaus. However, beyond this he saw that people of good will, who cared about the common good, were to be found within all religions and outside them and the way forward was to make connections and be open to seeing truth everywhere. Dogmatic certainty, whether secular or religious, had got in the way for too long. Just before his death David was aware the book he had written with his friend Simon Burne on this subject was due to be published. The book is called “The Wobbly Bridge” From Hatred to Hope and is available from Simon for £10 including P&P. Simon can be contacted by email simonburne@ntlworld.com . We hope the book will be reviewed for a future edition of Progressive Voices. Sue Goddard and Nicola Phelan on behalf of Rugby PCN group