Progressive priest retires - an appreciation and a vacancy 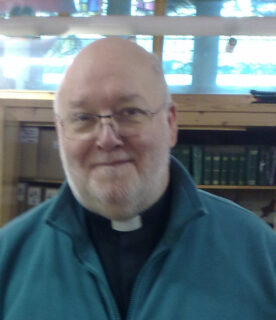 The Diocese of Worcester has advertised for a priest to follow Peter Knight who looked after three churches in the parish of Malvern Link with Cowleigh. Peter co-founded the PCN group in Malvern. One of his churchwardens, Martin Purser, looks back on his ministry.

Peter Knight arrived in Malvern nearly 13 years ago fresh from Long Lartin prison. He had of, of course, been the chaplain. His first act was to change things.

His experience in ministering to some of the most dangerous prisoners in the country had convinced him of the unconditional nature of God's love to the extent that he felt unable to say with them the Prayer of Humble access. And if not with them then not with anybody. From that day forward the words "Lord I am not worthy....." have not been used in our parish. Instead Peter invited us to Communion with the words "The gifts of God for the people of God" to which we answered "Holy things for Holy people". And when the Bishop visited he used those words and we answered and it felt right.

That has been Peter's remarkable achievement. He has made all sorts of changes in worship, in organisation and in thinking but whatever he has done has felt natural and right. He has merged three parishes from an earlier team ministry into a single entity almost entirely without conflict. His invitation to Bishop Jack Spong to preach was the right thing to do even if it was not seen as such by some other priests in the area. In his first sermon he explained that it was his only one: "We are forgiven, loved and free". He did himself an injustice. Yes the same same message was often repeated but he way he built out from it to show us towards a better, I would say, more mature, understanding of our faith and of the scriptures has been to give us a gift that will last us a lifetime. Speaking recently to a very happy visiting priest who had just celebrated Mass using the liturgy that Peter had compiled, he explained that he had loved using Peter's words because they seemed to change the celebration from one in which he acted as a leader and instructor to one in which he acted as a friend, guiding and sharing. Until that moment I hadn't really noticed the change. It had happened gently over time. If necessary it had, I suppose, been introduced through reasoned teaching. But however it happened, it has felt natural and right.

Peter's retirement leaves us looking for a successor who shares his vision and understanding and who can build on the foundations he has laid. His innovations have included the use of Living the Question material for Lent and Advent study and the establishment of a fortnightly meeting of the "Spiritual but Not Necessarily Religious". While much of Peter's teaching was to his congregation, he did occasionally broadcast on local radio and SBNNR certainly started to reach a group to whom church attendance was some sort of obstacle. We feel that what we have learned through Peter sets Christ's teaching and the message of the Bible in a context entirely compatible with a 21st century understanding of the world. We feel that there are many who would welcome and benefit from that same knowledge if only we could get it to them. But we don't know how. Maybe our next priest will be able to show us, hopefully leading us by a route that feels natural and right.

The vacancy has been advertised on the Worcester diocesan website . The Parish Profile can be downloaded from the Malvern Link with Cowleigh parish website. Martin Purser is happy to hear from anyone who would like to know more about the the parish.