PCN mourns the death of our Honorary Adviser, Jim Cotter 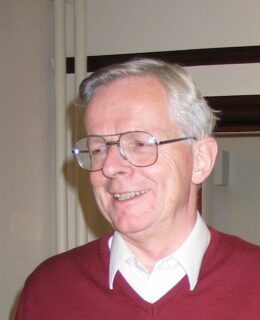 In this personal memoir, PCN founder, Hugh Dawes, recollects why Jim Cotter is to be admired and why PCN has lost a dear friend.

Jim Cotter died on the Wednesday of Holy Week, 16th April, peacefully at home without pain, and with friends around him. He was a remarkable man – wise, humane and gentle, but strong in his determination to struggle for an inclusive Christianity, since inclusivity was at the very heart of Jesus’s gospel.

He was a founding member of what was then called simply the Gay Christian Movement. I first got to know him when I was appointed to succeed him as chaplain of one of the Cambridge colleges. His had been a three year appointment, and might reasonably have been expected to be extended. But Jim’s ‘coming out’ alarmed some of the college’s senior members of the college, and no extension was granted.

He did other jobs, including several years in ministerial training in St Albans, but after that he floated free. He was indeed a wordsmith. He had a great gift for taking words familiar in the language of Christianity and in particular of Anglicanism and transforming them; breathing into them new life and vitality. Many people of all traditions have reason to be grateful for his craftsmanship with prayers that can indeed be prayed. His Prayers at Night have been used by people all over the world.

He was also a very good friend to PCN. The Network’s first set of trustees were very keen to have an annual pattern of retreats for members, and Jim seemed an obvious person to lead the first one in 2003. The theme Jim chose was “God? Real Presence or Ultimate Concern. ” Alan Powell was the committee member who took charge of organising the retreat and in cooperation with Jim did so brilliantly. We used what was then still called St Deiniol’s Library, and the event proved to be fully booked.

The member who offered her personal reflections afterwards wrote.

“There was much about the weekend that was encouraging and affirming: conversations with people who were willing to listen to my story as well as tell their own; plenaries led in a way that assumed we all had wisdom to bring; stimulating suggestions for further reading; open discussions; plenty space for silence and reflection. Jim Cotter’s input was both personal and professional, both light and profound as he coaxed us to reflect on the nature of the God in whom we did or didn’t believe, whether ‘out there’, ‘in here’ or both and neither simultaneously. The Biblical record was taken seriously, and indeed reclaimed as a tool for open enquiry, and a source of fun. Had I taken nothing else home from this retreat, I would be forever grateful for the image of the feast given by the shepherd to celebrate the finding of the lost sheep. Guess what was on the menu?!!”

I am truly grateful to have encountered Jim and known him. He was a wonderful mixture. At a large gathering of friends some years ago and long before his final illness he told me that he was looking forward to heaven because the sex would be wonderful there. I looked back at him somewhat circumspectly, but he repeated that again. I hope that heaven will by now be living up to his expectations! Simply resting in peace would not be Jim’s style.

Please feel free to add your own memories of Jim Cotter in the comments section. There’s a memorial service for Jim at St Martins in the Fields at 3 pm on Wednesday 25th June.