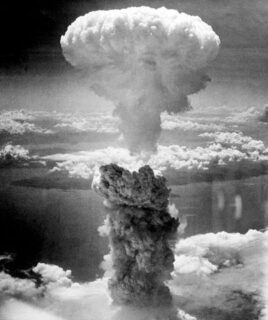 It is believed that folding 1,000 origami cranes brings one a peaceful and healthy life. Following the nuclear bombing of Hiroshima and Nagasaki in 1945, origami crane folding became an action for peace and nuclear abolition, particularly for young people. This arose from the story of Sadako Sasaki, a child at the time of the nuclear bombing of Hiroshima. Sadako contracted leukaemia from the radioactive fallout. She tried to make 1000 cranes but passed

away before she could finish. Her classmates finished the 1000 cranes for her, and then made crane making their message for peace. They raised funds for a memorial to Sadako in the Hiroshima Peace Park. Origami crane making is now taught in schools around the world. Action: Organise a crane-making workshop at your local school, youth group, workplace or place of worship. Video on folding a paper crane 3. Organise a prayer vigil or church service

Religious and faith-based communities can reflect on the morality of nuclear weapons, the role that ethics can play to abolish nuclear weapons, and the peace-making power of religious leadership and action. Action: Organise a special service at your church, mosque, synagogue, temple or other place of worship. Endorse the Joint statement of religious leaders and legislators for a nuclear-weapon-free world.

Members of Parliament play a key role in determining government policy regarding nuclear abolition. They are able to ask questions in parliament (to which governments have to reply, propose motions, release joint statements and organise events. Over 800 parliamentarians from across the world have joined Parliamentarians for Nuclear Non-proliferation and Disarmament (PNND) in order to enhance their impact globally.

5. Engage your mayor and local council

Over 7000 cities are members of Mayors for Peace, which is led by the Mayor of Hiroshima. Action: Organise a commemoration event at your city council or at a suitable site in your city or town (Peace Garden, Peace memorial….). Invite the mayor to speak. Use the occasion to read out the Hiroshima Peace Declaration which was produced this year.

Organise a nuclear disarmament film event. Documentaries include Nuclear Savage and Where the Wind Blew. Movies include The Man Who Saved the World, Thirteen Days (based on the Cuban Missile Crisis), Crimson Tide and The Peacemaker. Contact info@pnnd.org for information and assistance with screening Where the Wind Blew or The Man who Saved the World.