National Catholic Reporter Editorial Staff issue open letter to the US Catholic bishops: "It's over" 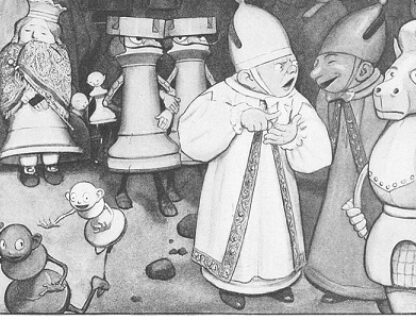 RC bishops in USA invited to try humility ... attend in mufti and leave all the collars and black suits, silk and lace and pectoral crosses at home.

We address you as you approach this year's national meeting in Baltimore because we know there is nowhere left to hide.

All the manipulations and contortions of the past 33 years, all the attempts to deflect and equivocate — all of it has brought the church, but especially you, to this moment.

Even the feds are now on the trail. They've ordered that you not destroy any documents. The Department of Justice is conducting a national criminal investigation of how you've handled the clergy sex abuse scandal. It is a point in our history without precedent. We want you to know that you aren't alone in this moment, you've not been abandoned. But this time it must be different. This time it won't be easy.

From fable to sacred text, we know how this goes. The point is reached where all realize the king wears no clothes, the righteous accusers read the writing in the sand and fade away, the religious authorities receive the Master's most stinging rebukes. As a class of religious rulers, the loudest among you have become quite good at applying the law and claiming divine authority in marginalizing those who transgress the statutes. The prolonged abuse scandal would suggest, however, that you've not done very well taking stock of yourselves.

We have no special insight into why this moment — the Pennsylvania grand jury report, the downfall of Theodore McCarrick — has so captured the public imagination and pushed the church to this outer limit of exposure and vulnerability. There are theories, not least of which is that the opportunists among us are attempting to use this moment to bring down the only pope who has actually dethroned bishops and a cardinal for their crimes and indiscretions.

But that's an issue for another time.

The reality, we all know, is that it has been going on for a long time. The first national story appeared across four pages of this publication in the summer of 1985. The worst of it occurred during the pontificate of the hastily sainted John Paul II, a giant on the world stage, but a pastor who let wolves roam his own flock. His idealized concept of heroic priesthood apparently left him incapable of hearing the truth from credible witnesses, including the few bishops who dared disturb that idealized world with troubling reports. He promoted to the end Marciel Maciel Degollado, founder of the Legion of Christ, and a persona who came to represent the worst of the abuse scandal. Maciel, an accomplished sycophant, kept scrutiny at bay with his ability to spread a lot of young priests and a lot of money around the Vatican.

This is about a rot at the heart of the culture entrusted with leadership of the Catholic community.

The point beyond dispute is that we are at a moment in U.S. church history — and perhaps in the history of the global church — without precedent. This is not about debatable matters — celibacy or the filioque clause, or the primacy of Scripture or whether the Earth is the center of the universe or whether women should be allowed ordination or any of the hot button issues that have kept us roiling and at each others' throats these past decades. This, instead, is about a rot at the heart of the culture entrusted with leadership of the Catholic community. A rot so pervasive that it has touched every aspect of the community's life, disrupting all of the certainties and presumptions about who we are and who you are that helped hold this community together.

Those who worked so ardently in the past to enable you — the faithful, so betrayed, who just couldn't believe you would engage in such a deliberate cover up; the likes of George Weigel and his blind, uncritical hagiography of Pope John Paul II; Dr. Mary Ann Glendon and the late Fr. Richard John Neuhaus and their naive celebration and defense of Maciel; the rest of the chorus at First Things and like publications; the telling silence of so many other Catholic outlets; the absurdity of charlatan William Donohue and his silly "Catholic" League — they helped sustain your weak narrative as many of them denigrated those who raised the tough questions and pursued the truth.

None of them any longer has a persuasive case to make. Some of them now try to blame the crisis on gay priests. You might be tempted to latch onto that diversion, but it will only prolong the already intolerably long agony.

Gay priests and bishops are certainly among us — probably a greater percentage of gays in the Catholic clergy, if anecdotal evidence and the private chatter of seminary rectors and heads of orders is to be believed, than one would find in the general population.

The clergy culture is in deep need of serious conversation and education about that issue and much more regarding sexuality. That discussion is unlikely on any significant scale because too many bishops and too many priests, if they were honest, would have to admit to an orientation that the church still calls "disordered." Unless the preponderance of credible experts has suddenly flipped its understanding of things, however, sexual orientation is not one of the topics that match with sexual abuse.

Orientation is not a determining factor in abuse of children. If it were, we'd have to be investigating heterosexual orientation as a cause because a lot of abuse is perpetrated by heterosexual men upon boys and girls. So, take that path if you'd like, but be prepared to lose whatever bit of credibility might be left in the tank.

You've been ensconced in a culture that has for too long protected you from the consequences of your worst instincts. The boundaries that once kept your culture safe from scrutiny have become as irrelevant today as the moats and walls of previous centuries. There is no hiding any longer. You've been imbibing the excesses of power, authority and privilege that have accrued over centuries and, like the addict who hits bottom, a fundamental decision for recovery is essential to your survival.

You've hit bottom not because the latest gush of bad news resulted from a resolve to come clean and tell the truth. It resulted from yet another investigation. In short, you were moved to words of contrition because you were, once again, caught. Yes, most of it is old news. Yes, the coverup was engineered mostly by bishops who are no longer in office or have died. News organizations once reluctant to take you on for fear of being labeled anti-Catholic are no longer reticent.

You've become certain clickbait. And you will continue to be as, in diocese after diocese, more documents are released and revealed and more grand juries look into the inner workings of this institution over the past 50 years or so. It is self-inflicted pain.

Bishops, you were certain enough about what was going on and its potential consequences that you employed individually and corporately legions of lawyers.

And please stop asserting that you did not know what was going on before 2002. If the scandal exploded in 2002, it was because a long fuse had already set off explosions in city after city and state after state and been chronicled widely for 17 years before the spark hit Boston. In the aftermath of those explosions, you were certain enough about what was going on and its potential consequences that you employed individually and corporately legions of lawyers. You knew enough to keep secret files under lock and key. You knew it was evil enough that you had to hide it.

There is no denying you've done a lot of adjusting to the bad news. You put together a charter to protect youth. (Fair to note that it's taken you 16 years to get around to considering including yourselves among those to be held accountable.) You've instituted a national office, paid for elaborate studies, instituted national and local review boards, held reconciliation services and required child protection training and background checks, and paid billions in settlements. The church is indisputably a safer place for kids for all of that effort. But it was all done in reaction to outside forces.

The only thing you can't be forced to do is what you would say our sacramental tradition requires: a deep personal examination, telling the truth, begging forgiveness and a resolve to amend.

The examination begins with the question that only you can answer, individually and as a group: How did we and our brothers in the past, as leaders of this clerical culture, reach the point where we could rationalize turning our backs on children who had been sexually tortured by our priests to protect those priests and our culture? One of your brothers, Chicago Cardinal Blase Cupich, has already laid out some appropriate steps. Bishops must "cede authority," he said, to allow for greater accountability to outside authority. He also said that "privilege, power and protection of a clerical culture" have to be "eradicated from the life of the church" or "everything else is a sideshow."

Those are worthy points to consider. The retreat you've scheduled for January would be the perfect place to do just that as a body. A suggestion: attend in mufti and leave all the trappings, the collars and black suits, all the silk and lace and pectoral crosses at home. God will recognize you. Take that little step in humility and actually meet as brothers. Seek out those among you who have suffered, who have known what it means to come through pain or addiction or illness. Ask them to help lead you out of this dark moment. They would know the way.

When it is over, and here we make a suggestion that runs contrary to journalistic interest: Be quiet. No grand pronouncements.

In the months to follow, as the federal investigation likely forces out more documents and that burning fuse continues to set off explosions, some of you may pay dearly for what you have or have not done in the past. We'll know how your retreat went by how you act in those moments.

We'll know whether you've really hit bottom and are on the mend with the best interests of the community at heart or whether you're still in search of cheap grace and the easy way out.

In the name of the child victims, the families torn apart, the parents who know no end to their agony, the body of Christ subjected to relentless humiliation for decades, it has to be over. This time has to be different.

We pray for you, Your sisters and brothers, your fellow pilgrims, the church.