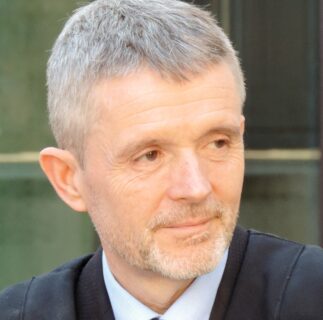 Adrian Alker, PCN Britain chair, has sent Martyn good wishes from PCN Britain in what is a pretty torrid affair which has taken its toll on Martyn's health.

Martyn Percy is to face a tribunal though the complaint made against him is as yet not clear. ​The complaint does not involve the Church of England and is a purely college matter, The matter has led to his suspension from both college and chapel duties. A defence fund has been formed and has raised £54 000 on GoFundMe

Tom Keighley reports that he has set up the fund raising website on behalf of the friends and colleagues of Martyn Percy, head of one of Oxford’s largest Colleges, and a Church of England Cathedral Dean. This is revised version of the 'story' to reflect what has been in the media. The press has carried a number of accounts of what is happening to Martyn Percy. As Martyn has made no public comments, here are summaries of three reports.

It is claimed the college’s academics have been ‘combing the statutes’ of Christ Church – founded by Henry VIII in 1546 – to find legal justification to get rid of Prof Percy…One way the plotters believe they can force him out is through a formal complaint…That complaint will now be judged by an internal tribunal. Prof Percy, 56, is also said to have received a stream of legal letters that an insider said risked ‘financially breaking him’ after he was forced to hire his own lawyers. The insider added: “It’s a tragedy, embarrassing and a disgrace.” Mail on Sunday

The tribunal process itself raises further questions about governance. It is understood that Dr Percy was given no opportunity to challenge any of the evidence against him…a college insider said: “Chapter and Governing Body did not invite the Dean to give any response to the complaint, or put forward any documents of his own before making their decision.” Church Times

The Bishop of Buckingham fears Percy is being “hounded out” for taking “the costly path of reform” rather than seeking a “quiet life”. His lawyers have raised concerns he has been bullied, saying he has been ostracized forced to run up large legal bills. Sunday Times

It appears therefore that Martyn’s position is a uniquely powerless one. It takes just seven complainants under the statutes of the college to request a tribunal to remove the Dean of Christ Church. Three strange steps appear to have led to this position.

First, the Dean was offered no proper investigation, at which evidence from both sides could be heard, read and weighed.

Second, there was no disciplinary hearing in which he could defend any allegations made against him.

Third, to avoid unnecessary conflict, processes of genuine mediation should always happen. Such mediation is entered into in good faith by both parties - rather than being used as a means to coerce and expedite a virtually immediate resignation, which is increasingly common in workplaces today.

In any normal place of work, a Tribunal would be the very final stage: and only if the investigation, disciplinary procedures and mediation had all failed. In Martyn’s case, the first three stages did not fail: it seems they were not really attempted.

Under the college statutes, the Dean has no grievance procedure available to him either, so he can’t complain about the treatment give him. Consequently, he can do nothing about the bullying and harassment he has received. Under natural justice any person should have rights. But the Martyn doesn’t.

Finally, the Dean seems to have no right to free speech. To defend himself, he has to find his own legal costs. His speech is not free. If you think this is unjust, then please help the support fund.