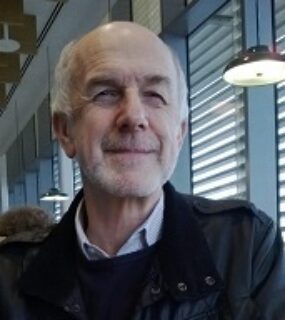 celebrating the life of Les Acklam, Vicar of St Faith’s from 1993 to 1996, and the first Chaplain at the new Lincoln University.

A remarkable service of Celebration of A Life was held at St Faith’s Church in Lincoln in February. People came from all over the country and heard tributes from a large number of people and sang some stand-out hymns. There was music from John Bell, Taize and Gerald Finzi, readings from Oscar Romero and Richard Rohr with blessings from all over.

We were celebrating the life of Les Acklam, Vicar of St Faith’s from 1993 to 1996, and the first Chaplain at the new Lincoln University. Les was that wonderful combination of being a priest who was both quiet and also extremely active and committed. He was both aware of the spirituality of ancient texts and also the stimulus of the thoughts of contemporary authors.

Les befriended so many. His doors were always open and he travelled widely. Those who shared in the celebrations at St Faiths’s represented but a small group of the many who were influenced by his ministry, his care, his enthusiasm and his friendship. Greetings came from a friend from the Phillipines whom Les had met in India; there was a message from the Moslem community made to feel valued by Les at the University; and groups from LGBTI communities, the homeless and the lonely.

Les was one of the few people to possess a rolled-up labyrinth which he would take for miles to provide a deep and powerful sense of the spiritual for all who engaged with it. I believe Les was a key player in the recognition of Richard Rohr in this country. He was one of the first British people to visit Richard’s Centre for Action and Contemplation in New Mexico, USA. As a result of Les,and others, spreading the word about this contemporary expression of Franciscan spirituality, Richard Rohr made a number of tours of the UK.

Les was instrumental in setting up the first Lincoln PCN group and attended many regional and national conferences. Another of his gifts was knowing which books to introduce to his friends. He had an acute awareness of what recent publication was likely to enable us to grow spiritually and theologically by reading his recommendations. He was also adept at responding to other people’s writings with shrewd and well thought out comments.

We shall miss Les Acklam, his gentle and relaxed enthusiasm and energy to carry out what he believed in. Long may his memory live in us who were inspired and encouraged by his loving support and leadership.