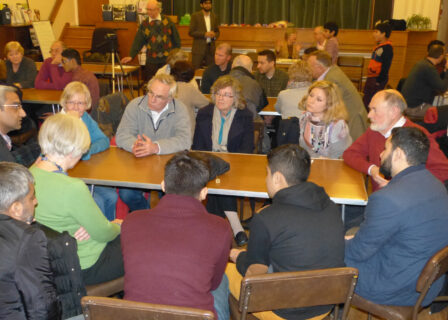 This was the latest event organised by the West Berkshire Peace and Integration Forum. About four years ago I got together with local Muslim, evangelical Christian, Quaker, Hindu and other friends to found this Forum. Our beliefs differ considerably, but we have a common heart for community building.

We first looked at our responses to the Charlie Hebdo issue with three speakers, Shahzad Nadeem, a local Muslim leader, Paul Cowan an Anglican church minister and Osama Shahzad a 14 year-old school student. The discussion from this focussed on the role of education. Would we prefer to send our children to schools which support (or condition them in) our own beliefs, or to schools which foster a more universal ethos?

This was followed by a thoughtful talk on the psychological mechanisms behind social conditioning, by Muhammad Tahir who blogs on ‘Islam and Psychology’, before we widened our exploration to a variety of other issues.

Our next panellist was Elena Verigo from Russia, presently teaching in Newbury. Her father is a Russian military officer. She helped us to enter into the history and aspirations of her people. But she also shared something of her struggle to be objective about the social conditioning which she, like everyone else in the world, has received.

Elena was followed by Jonathan Edwards, the former General Secretary of the Baptist Union of Great Britain, the fourth largest Christian denomination in the country. In that role he led the church's delegation to Jamaica to apologise for the Slave Trade. He had earlier thought that it was completely inappropriate for him to apologize for something for which he had had no personal responsibility. But the turning point came when a Ghanaian pastor had said to him, “You just don’t get it do you? When you come into a room you think we are meeting Jonathan Edwards. And you’re wrong. We see a white man who represents hundreds of years of oppression – and Jonathan Edwards as well.” Jonathan said that he realised that his life is part of a history.

After a time of silent reflection to identify specific examples of our own conditioning, good or bad, there followed animated discussion as we shared some of our findings in mixed groups.

The final two panellists had us riveted as they shared cameos from their lives. Sakira Suzia is a Metropolitan Police officer. She was chosen for the Met’s Olympic Torch Security Escort Team. She also received the highest award for bravery in the Met for her role policing the 2011 London riots. She described to us how she got fed up with arresting the same young people time and again. Sakira has just returned to the Met after taking a year out of her job to understand more the power of restorative justice. Immediately following Sakira came Charlie Ryder, who took part in a protest following the Stephen Lawrence murder twenty years ago. This became violent and he was arrested and imprisoned for throwing bricks at the police. He is now a prison chaplain. To have these two people speaking together was a very good example of moving beyond social conditioning and living into each other’s narratives.

After refreshments and informal discussion we came back together for a lively Q&A and whole group discussion. Many points of view were expressed. One contribution was from a South African who identified himself as an atheist. We represented a wide variety of people in the community. All of us really valued the opportunity to look more deeply at the motivations and conditioning which often lies behind some of the reactions we have. Plenty of scope for lateral thinking! As someone commented, “I only wish I had had the opportunity for this sort of discussion when I was a lot younger.”