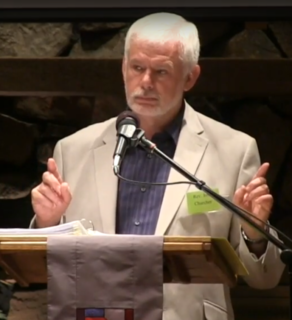 John's narrative was delivered at two conferences in August 2016 in the United States. The material is being made available in both written form and video. The Conference Reader and the conference videos can be both be found on John's website, Permission to Speak. (Currently, only three of his lectures are available as videos. We hope the fourth may be added soon.)

John Churcher welcomes invitations to lead group discussions based on his theme.

You can also link directly to the three available videos.

Lecture one: The Unknown BCE God

Lecture two: The Development of the Known CE God

Synopsis of the four lectures, by John Churcher

"These four lectures were delivered in August 2016 at the Community Christian Church, Springfield, Missouri and the Universalist Unitarian Congregation of Columbia, South Carolina. Some of the content was piloted in PCN Britain groups as well as progressive groups in North America over the previous year. The aim of my lectures is to provide pointers towards a possible future for both the institutional Church and the individual men and women seeking to be followers in the way of Rabbi Jesus.

The first lecture, 'The Unknown BCE God' considers the beginning of religion that grew out of the development of language and its accompanying realisation of there being a past, present and future, and that life was more than a simple survival / stimulus / response mechanism. My starting point is that all religions are human-created and therapeutic, arising from dark glass glimpses of what Karl Rahner spoke of as the 'Infinite Mystery'. As such, all religions are tribal explanations of sacred experiences.

Sacrifices have been offered to tribal gods from the earliest times of human consciousness, seeking renewed relationships with their human-created gods. Often it was through sacrificial lifeblood that many religions believed people could be forgiven and restored to a living relationship with their gods. However, an important point underpinning these lectures is that Christianity's theological progress down the millennia has often involved blood liturgy, but a frequently ignored fact is that such 'progress' has also included blood on the carpet rather than honourable discussion and compromise between theologically warring sects.

Lecture two, 'The Development of the Known God' looks at the way in which Christian theology changed during the first millennium, highlighting a number of events and people to illustrate what was added to the Jesus story. When considering Christian tribalism it is important to understand that none of the Gospels, Letters or apocalypse were written for us today. They were written to encourage, to teach and to inspire at their time of writing attempting to make sense of the life and death of Rabbi Jesus of Nazareth long after his execution. The Christian Testament as a whole is an explanation of the lives and experiences of the followers of Rabbi Jesus in the second half of the first century CE.

Also, the second lecture considers the attempts to stamp an orthodoxy of belief across the fourth century Roman Empire. During the opening four centuries CE there was no single orthodoxy of belief concerning Rabbi Jesus who became Jesus, the Christ of the Church. Christian communities across the Mediterranean and Middle East developed 'local' understandings and explanations of their particular experiences of their God met in Jesus. The followers of Jesus across those opening four centuries often went through times of peaceful co-existence with the ruling powers as well as times of severe persecution and hardship at their hands.

Lecture three, 'From Faith to Reason' looks at what was added to the Jesus story during the second millennium, making the point that today's Christianity owes a lot more to the power politics of Europe and the relationships between the Popes and the kings than it does to Rabbi Jesus. It also considers the failed Protestant Reformation. This lecture concludes with liberal and progressive thinkers during the late 19th century through to the present day. Sigmund Freud made a point about people needing a father figure to protect them and to give them hope. This is exactly how religion began in the early days of homo sapiens!

Lecture four 'Creating God in Our Image' explores the way in which we continue to create our gods in our own images and imaginations. However, I acknowledge that there are those who believe in some kind of protective and protecting god out there, and that this does give a genuine meaning to life beyond the self. This is natural for many and I in no way attempt to undermine this need, but I wish more seekers and finders would explain what we/they are experiencing for themselves and in their own words. Again I emphasise that Rabbi Jesus remains my 'dark glass' glimpse and experiential gateway into the Infinite Mystery that exists beyond human experience and description.

To have relevance in our world today we need to rediscover as best we can the wisdom, the enabling and liberating leadership of the life of Rabbi Jesus of Nazareth – a man who found something in life that was worth dying for. Fortunately today there is the growing presence of progressive followers of the way of Rabbi Jesus who reject the existence of a devil and the substitutionary atonement (at-one-ment with God) along with any ransom theology.

The lectures conclude with the encouragement that we should continue to create an individual god for and in our own personal image, describing what of the Infinite Mystery we glimpse through that darkened glass of personal reflection and experience. The encouragement is for each individual to describe her or his sacred experiences that will create a personal god fit for the twenty-first century as we move from the orthodoxy of words into the orthopraxis of living costly, sacrificial lives of love in the service of the Namaste God living within us all.

Not only am I available to lead local group discussions but I also welcome comments and suggestions from those who use these study materials so that the Conference Reader can be continually updated".