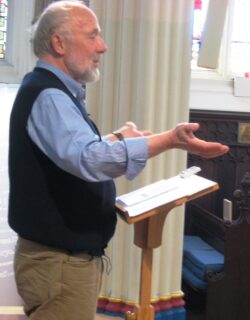 Marcus Borg possessed a calm and reasoned style of speech which, combined with his lively sense of humour, made him the powerful communicator of progressive Christian thought that he was. Many of us first became familiar with him through his contributions to the Living the Questions DVDs. His death is like the passing of a favourite uncle who cannot be replaced.

PCN Britain joins with all who value his learning and his insight in giving thanks for his life and being grateful for his legacy. His heritage is to be found not just in his books and recordings but in the many Christians who managed to stay with their faith because he helped them to re-envisage what it was about.

We send our sincere condolences to his wife and family.

A full appreciation of the life and work of Marcus Borg will appear in the next issue of Progressive Voices published in mid March. Meanwhile we invite those who remember Marcus to add their memories of him by using the 'Comment' facility below.