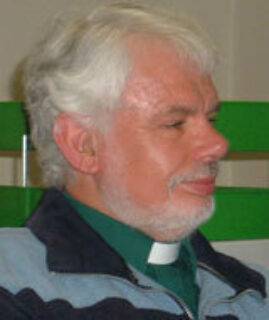 I shall not take a campaigning approach. We have members who are gay and lesbian couples who remain in a church and who long to have the blessing of a church-based gay marriage whenever and wherever that becomes possible. However not all gay couples wish to go beyond civil partnership - including some of those who still attend a local church. My press release is identifying with those who have experienced immense antagonism and injustice over the years - but it is not saying that there should be any compulsion for couples or churches to undertake a church-based gay marriage ceremony. It is a statement of solidarity and support to those who wish to take this particular route for their lives together. I appreciate that in issuing this press release I may be creating challenges for certain denominations and clergy on this difficult issue but I consulted with the officers before making the statement and did so with their agreement. I look forward to comments from the membership and especially to the results of our planned consultation process.

The recent Management Committee meeting was held in Birmingham and, as usual, covered an immense range of topics. Here are some of the main issues and outcomes for your information:

New leaflet for Churches: The latest draft was discussed and further suggestions made. The intention is that the leaflet will demonstrate to churches that PCN Britain has resources available to help and to support congregations in their work. One of the resources available will be PCN people willing to talk to churches, clergy groups, etc. ‘PCN people’ needs to include members beyond the Management Committee. It was agreed to invite members who felt confident about visiting interested churches to introduce progressive Christianity and PCN Britain to volunteer for this task. If you are willing and experienced in public speaking / debate and would like to volunteer please contact me. john.churcher@pcnbritain.org.uk

Newsletter: You will have noticed that there are changes to the Newsletter! We have moved from blue to white paper as this is easier to be read by those with visual impairment. We hope to make further changes in the future – including the introduction of colour covers. Also it was agreed that the newsletter might acquire a title and, after discussion, it was suggested that ‘Progressive Voices’ might make a good title. Comments please.

September 2012 conference in London: This will be a cross denominational look at how to develop and deliver a progressive church, with the emphasis on action and how the 8 points can be lived out in church work. The venue, date and speakers are all provisional at the moment but will be confirmed as soon as possible.

Greenbelt preparation: At Greenbelt 2012 we will be in partnership with the Centre for Radical Christianity, Inclusive Church and Modern Church, sharing a joint area in the G-source tent. It is intended to have a banner representing the four organisations which features four words: ‘Progressive, Radical, Inclusive, Modern.’Volunteers are needed to staff the stalls and also to act as greeters on behalf of all four groups. If you are planning to attend Greenbelt and would like to volunteer to help for a short time while there then please contact Adrian Alker or Paul Onslow. adrian.alker@pcnbritain.org.uk, paul.onslow@pcnbritain.org.uk

Together in Hope Publications: All three study guides are selling well. In the pipeline are Liberation Theology by Neil Burgess, 5 Letters on the Resurrection by Jack Spong and Mysticism and Spirituality by John Hetherington. It is hoped that two of these will be published by the summer. Two of the existing series, Walk the Jesus Walk and Christmas: Ancient Meanings, Modern Faith, can now be ordered through Amazon as well as our own website. Amazon don’t actually stock it, the order is referred to us and it remains cheaper to buy it from our website. The other news is that from April, Amazon will be selling Kindle downloads of our titles. We aim to have e-book downloads available on our own website before long too.

Spring conference: Don’t forget our AGM and spring conference at York on May 19th. It takes place at St Columba’s URC, starting at 10.30am. The speaker is Chris Howson of Bradford Soulspace, author of A Just Church. He will give us his take on our theme for the year – how to turn our progressive Christianity into action. The next Management Committee meeting [with newly elected members] will take place immediately after the conference. I hope to meet as many of you as possible at York.

Once again, thank you for your support of and involvement in the developing work of PCN Britain. Please let me have your feedback from this Update and continue to contact me on matters concerning PCN Britain.