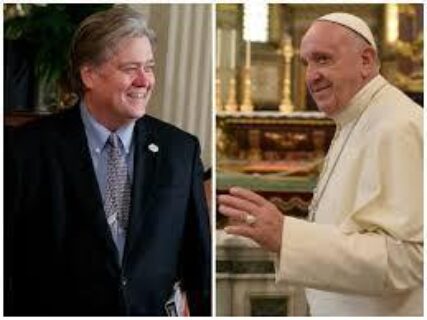 Steve Bannon, the man even Donald Trump found too extreme, has waded into European politics with a mission

Steve Bannon, the man even Donald Trump found too extreme, has waded into European politics with a mission – he says – to defend the continent’s Judaeo-Christian civilisation.

His particular battlefield is the forthcoming election for a new European Parliament. He is putting his weight, financial support and organising ability behind the cause of nationalist populism, which has reared its head in numerous ways across the continent (most recently with the surge in support for the far-right Vox party in Spain) with one singular characteristic: opposition to the flow of refugees, mostly Muslims, from north Africa and the Middle East.

Europe should tell Mr Bannon his help is not wanted. It can take care of itself. Among the more pernicious aspects of Mr Bannon’s campaign is his opposition to, and enmity towards, Pope Francis. The Pope has repeatedly called upon Europeans to be generous towards those fleeing persecution and conflict, and warned against simplistic populist campaigns which aim to build walls and close frontiers.

The Tablet 2nd May