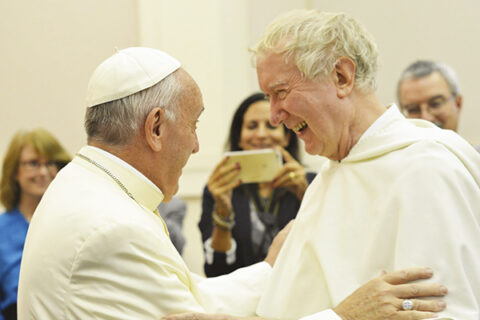 For millions of young people Christianity .. means nothing at all. ....“as outmoded as a typewriter”.

Speaking to Maggie Fergusson for The Tablet Radcliffe says, "For millions of young people Christianity .. means nothing at all. It is, as Radcliffe admits, “as outmoded as a typewriter”. If pushed to consider it at all, most would probably share Stephen Hawking’s belief that we are just “chemical scum on an average-sized planet”. So what has a religion hedged about with guilt-inducing, tripwire rules to offer? Radcliffe is adamant. “I believe that in every human heart lurks the desire for a love that is infinite, even divine. We have what C.S. Lewis called Sehnsuch – the inconsolable yearning for we know not what.” We should not respond to this by insisting on blind observance of rules – “true obedience is intelligent, questioning, unafraid to doubt and probe in its search for truth” – and rules must be seen for what they truly are. “I think that, if people are touched by the central thing of what it might mean to be offered the gift of infinite love, then somehow the other questions will cease to dominate. If only we could see that all commandments are invitations to friendship, in some way or other! They’re not saying, ‘This is what you’re allowed to do’, or ‘This is what you’re forbidden to do’. They’re saying, ‘If you want to grow in love, try this.’” He goes further. Alive in God doesn’t simply look at ways we Christians might effectively set out our stall for non-believers, it urges us to abandon our “silos of the like-minded” and “attend to the wisdom” of those whose views we may not find immediately sympathetic. We need to listen to unbelievers, and to those of other faiths, to engage them as allies in what St Thomas Aquinas called latitudine cordis: the expansion of the heart. Dissent is fruitful; difference fertile. Alive in God: A Christian Imagination