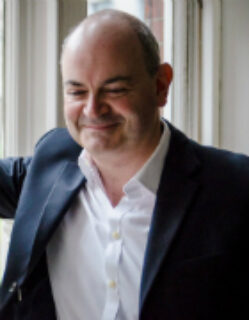 Mark Oakley also has a huge collection of memorable phrases. Such as, “for all your doctrinal headaches take Paradox”: this was almost an aside and probably missed by many. “Be unashamed to reason, and unafraid to question”. “Don’t surrender a good question for a mere answer”. He quoted Peter Berger who has said, “Laughter is a promise of redemption”. Mark also quoted, “The Bible is so important it can’t be taken literally” but I missed the source and couldn’t find it on Google either. One more: “God loves us so much as we are, he (sic) doesn’t want us to stay like it”. If the source is not claimed, let’s attribute it to Mark Oakley!

Beginning by relating his own journey of faith, Mark described how he learnt to love the language of the Bible at school, and how to think critically and live faithfully. After university days at Kings College, London, Mark visited India where he learnt another aspect of the world leading him to question whether the church really did have a monopoly on truth. He read the truth of the Bible in between the lines.

Not long after ordination, Mark had his first book published, “The Collage of God.” It is a spiritual beach-combing compilation of openly contradictory positions such as are found in everyday life. He refers to the ideas of Meister Eckhart, another person of paradox, “within which, somehow, there is an integrity”, for instance: “God is both present and hidden” and “We practice our devotion (to God) and we experience dereliction (from God)”. Eckhart went on to say, “Hiddenness is God’s last resort against idolatry - a graceful irritant that stops us getting above ourselves”

Mark sees Jesus as a man of imagination - like a poet - so we need to express our faith creatively and with all our emotions, especially laughter. Laughter recognises truth and pricks out our pomposity. We can express our faith daily by speaking up for others - the voiceless, the poor, the immigrants etc. and by being courageous. “The Christian spirit is nothing unless it includes speaking up for others. It’s much better to live in the light (of Jesus) so that we can be his disciples. Be afraid but do it anyway.”

On prayer, Mark said he doesn’t know what it is made of but he does know it is important - especially in its ritualisation within the liturgy.

The second session of the day conference was devoted to poetry itself. Mark began by saying we are people of rhythm - our hearts beat regularly and our breathing matches it. Many lines of poetry can be read with one breath such as the rhyme that sounds like “tee tum, tee tum, tee tum, tee tum, tee tum” ie 5 beats. Poetry expresses feelings and emotions, hopes and dreams - in which meaning is always running ahead saying, “Catch me if you can”. Being lost occasionally is part of the experience.

Mark’s next book will be called “The Splash of Words” in which he will say, “Nothing can be said about God from a definitive position” and, ”God loves us so much, as we are, he (sic) doesn’t want us to stay like it”.

When we first react to experiences, arguments or new ideas, we tend to give a quick reaction from the gut. We say, “I don’t like/agree/want that”. This leads us to a comfort zone where there is no challenge, no depth and where we can’t read between the lines.

Poetry, however, “keeps the rumour of God alive…. We people of faith need to be poetic. God is in this world as poetry is in a poem. Literalism is the opposite to the language of love and the enemy of God”.

The conference concluded in an exercise where, in small groups, we were given two poems chosen by Mark. One was more straight-forward and one more difficult. We discussed which was the one we liked best and each group told the conference their choice and why.

Alan Race thanked Mark at the end of the day in which, to judge by the reaction sheets, we had all been stimulated and reinvigorated, learning how poetry can inspire and illuminate radical theology.

Tony Rutherford was the conference organiser and is a trustee of PCN Britain. Mark Oakley is Canon Chancellor of St Paul's Cathedral, London. He carries particular responsibility for educational work and engagement with the arts at the cathedral.