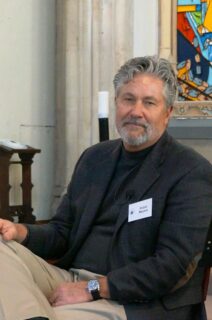 Meyers gave two lectures. The first, How I became a heretic with help from Jesus. The second, Quantum Physics and the Future of God. What follows is a series of notes and quotes from these talks, compiled jointly by Brian Wilson and Andy Vivian, two members of PCN Britain.

To guide the reader, we have divided this article into subsections – the titles of which are ours not Robin Meyers’. If we have misrepresented or misunderstood any of his words the fault is entirely ours and we welcome your suggested improvements and comments.

How I became a heretic with help from Jesus

Not surprisingly, when you consider the titles of his books, Robin Meyers is highly critical of both the US government and the Christian right wing establishment in America. And this is where he started his first talk:

1. Fascism is the control of government by special interests with the blessing of the church.

2. Empires project the tone: ‘Be afraid, be very afraid’. For Jesus it was: ‘Fear not’.

3. The American right wing church a compliant acolyte of the government, promoting patriarchal values…. Its members are people who worship the Jesus in the Bible but would have him arrested immediately on his return.

About Jesus and what it means to be Christian

1. Jesus never had a creed; the Sermon on the Mount is all about being and doing. By the time we get to the formulation of the Nicene Creed (323CE) you have not a word about what you should do or be. The only thing they talk about is what to believe.

2. The early church took a while to decide that Jesus was divine. In 50-55CE Paul spoke of God ‘promoting’ Jesus at the time of his resurrection. A few years later, the gospel of Mark noted that God acknowledged Jesus as his son at the time of his baptism. Ten or more years later, Matthew and Luke’s gospels give us the birth narratives where Jesus’ divinity is proclaimed at his birth. At the end of the first century or early in the second, John’s gospel talks of Jesus being one with God from the beginning of time.

3. We should demote Jesus so we can meet him before he was God and reflect instead on the God he points us to.

4. The Trinity is a relational metaphor, not a metaphysic. It was designed as a signpost; it has become a hitching post.

5. You don’t become gracious by reading a book. Book-reading liberals can be snarky, stuck up and judgemental.

Church and how it should work

1. There is a spiritual need to be part of a ‘beloved’ community, to share a sacred space, to make promises about how we intend to live our lives.

A. Biblically responsible – Attend to the source book of our faith but interpret it in a responsible way. Don’t surrender the Bible to fundamentalists

B. Intellectually Honest – Do not hide from the congregation the context in which the Bible was written, the truths you learned at theological college. Do not hide the truth because you might upset someone. If you daren’t offend, you won’t inspire

C. Emotionally satisfying – not the same as emotionalism. Accept that we have over intellectualised our faith. Eg in the Emmaus road story: the two disciples recognised Jesus when he stayed and broke bread with him; not when he explained the prophets

D. Socially significant – This includes an understanding that political ‘empires’ always involve oppression. Eg they give rich people greatest access to cheap credit. Find ways of doing good. Either we all matter, or no one does.

3. Do your beliefs change the shape of your day? Do you care less about being right than loving?

4. Churches cannot be too honest or too compassionate. Churches should do justice, love mercy and walk humbly with God – if not now, in the time of Trump and Brexit, then when? It is OK for churches to go underground and a bit crazy.

Quantum physics and the future of God

Faith in a scientific age

1. God is neither a supernatural cosmic comforter nor divine assassin. Such a God is dead for millions. People no longer believe there are rewards to be had from holding such beliefs. Many church people are closet atheists – they do not believe there is anything out there with which humans can react. When the Sky God is rejected this can lead us into being mystics. Non-theist mystics reject an autonomous deity but need not rule out a transcendent presence.

2. The Westar Institute began The Jesus Seminar. This is now being wound down to be replaced by The God Seminar.

3. The Bible does not ‘say’ anything for today. We can only state that it ‘said’ things for its own times – from which we may learn lessons for today. In reading the Bible we are overhearing an ancient conversation. The context was an Aristotelian view of the universe. Then along came Copernicus, Gallileo and Newton and Einstein.

4. Newton saw the whole as simply the sum of its parts – an atomistic view, which leads us to rule out mystery. A child is behaving badly? Fix the child – no need to enquire into the health of the family. The spiritual quest becomes simply learning the rules to avoid loss and achieve salvation.

5. The alternative is a Luminous Web in which the whole is more than the sum of its parts. Here there is no such thing as the individual because everything is in a relationship and relationships change things. Borg talks of the ‘Something more’ which is found within the whole. (1+1 = 2 but don’t forget this doesn’t happen without the +)

6. Within the Luminous Web religion is less about fixing. We are each of us a personal universe of complexity.

A paradigm arising from quantum physics

1. A key experiment in quantum physics is called the EPR (Einstein-Podolsky-Rosen) experiment. They discovered that twin atomic particles rotating in opposite directions, when separated by a large distance, continue to react to each other. Change the direction of spin of one particle and the other also changes direction. This happens faster than the speed of light and has no known mechanism. It has been called ‘spooky action at a distance’. A shiver somewhere in the Milky Way leads to a shiver in this church perhaps. This produced the theory of Quantum Entanglement.

2. There is no separation, only the illusion of separation. Is Love the spiritual equivalent of Quantum Entanglement? Is this why the Romans failed to deal with their ‘local problem’ when they crucified Jesus?

3. Science and religion should be natural partners and quantum physics shows the way…. Religion has too long dealt with alternative facts.

4. Some speak of the universe as having a primal memory arising before the big bang, when time and matter were not separate. After the big bang space became here and there and then and now but a memory of being one – truly deeply one - remains. The mystic touches this oneness. Jesus said what you do for others you do for me. The illusion of separation is the enemy of the future.

5. Within the luminous web physical action and reaction are explicable but a-moral – for example an earthquake. But moral actions (including our reactions to physical events) also have moral reactions which stem out from them. An earthquake is not God’s punishment of mankind for its evil deeds; it is the consequence of tectonic plates rubbing together – a totally a-moral event. Deaths from it are a consequence of blind chance – not the wrath of God. They too are a-moral. But our rush to help survivors is a moral action and the consequences are likewise moral.

1. God does nothing. God is the spiritual relation that binds all things. God makes nothing happen. God is not a person – more a journey than a destination. Borrowing from Paul Tillich, God is a mystery at the centre of the Universe: the Depth and Ground of our being.

2. We are not alone, we are part of a web of energy that connects everything, the ground of being itself. God is the Whole-ly One.

To view some photos of the day, please see our photo gallery of the conference