Harry Houldsworth pays tribute to two female authors, separated by over six hundred years, who have given him a sense that there may be a feminine approach to faith. 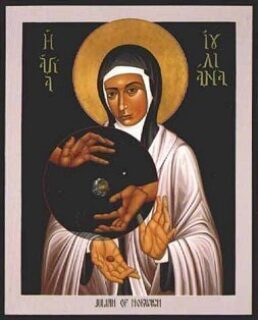 I don’t know how many members of PCN Britain saw the superb documentary about St Julian of Norwich, shown on BBC4 in July of this year. The title was: The search for the lost Manuscript: Julian of Norwich. It was presented by Dr Janina Ramirez...

Dr Ramirez explained how, about 1373, St Julian of Norwich became the first woman to write a book in English. St Julian suggested that God was ‘unconditionally loving’ and that He was always ready to accept the frailty of the human condition. The message was at odds with the Church of her time, and her book Revelations of Divine Love was supressed for 600 years.

The main thrust of Dr Ramirez’s documentary is how a determined group of women succeeded in preserving copies of Revelations of Divine Love through several centuries. This is excellent, but I would have welcomed further discussion of the significance of St Julian’s ideas.

I believe that the significance of St Julian is that she instinctively articulated a ‘woman’s response to Jesus and the Gospels’. It is a response that explains three things: why women were so attracted to Jesus in his lifetime, why women contributed so much to the expansion of Christianity in the succeeding centuries, and why, in 2016, so many church congregations are composed mainly of women.

Members of PCN Britain are familiar with the ideas of Dr Val Webb, the Australian theologian and expounder of feminist theologies. I see a thread between Dr Webb’s ideas, through the ideas of St Julian of Norwich, running back 2000 years. This thread identifies a female response to Jesus, and to Christianity as it developed in the later centuries. It may be ‘female’ in character, but it is equally relevant and beneficial to men as to women; it is not anti-male.

In her book, Band of Angels, (published 2013 by Atlantic Books) Kate Cooper discusses the role of women in the development of Christianity from the time of Jesus until the end of the Roman Empire. She explains that it was a period when ‘faith’ was rarely a discussion about whether God exists; it was more a discussion about ‘trust and love or loyalty and faithfulness’ rather than about ‘belief’, and more about ‘attitudes’ than logical argument. I think that this is important in understanding the nature of ‘women’s theology’.

What comes out of Kate Cooper’s book is a powerful sense that women responded intuitively to Jesus, and to the later teaching in the Gospels, to the Acts of the Apostles, and to the letters of St Paul and his associates. This wasn’t a modern feminist response.

Women in past centuries (like their menfolk) lived in a violent and uncertain world. Death was commonplace, through disease, war, civil unrest, or as a consequence of quarrels within families or communities. The strong preyed on the weak, and the weak had no option but to find protectors, whether they were family members, friends, a local chief, a local lord, a friend of the king, and so on. Women accepted this reality and the inequalities; there was nothing they could do about them.

Women (and men) knew that human beings were selfish and they thought that like earthly rulers, God or the gods exhibited many of the same spiteful tendencies. Experience taught women (and men) that appeasement was often the only effective survival technique when dealing with either bullies or deities.

When Jesus came on the scene he offered men and women a new way of seeing things. Christine Pedotti (Jesus: cet homme inconnu, XO Editions, Paris, 2013) explains this in depth, emphasising that the fundamentals of his teaching had little to do with the exercise of religion in the normal sense of the word.

It is important to realise that women (or men) didn’t see ‘God’, or even the ‘Son of God’, walking into their village. They saw a holy man, whose personality, smile and words, completely bowled them over. Jesus talked about love, about God’s love, about forgiveness, and about the need for genuine repentance. He spoke of God as everyone’s ‘father’ (as a ‘parent’ in modern language). And Jesus was seen as a miracle worker and a healer of diseases caused by sin

The evidence in the Gospels is that many women instinctively identified with Jesus’ teaching, while men were slow to empathise with the formula of love. Men wanted to see evidence of God’s power on earth: evidence that God could still storms, could prevent death, guarantee success in life, or even ensure that a battle would be won; or better still, that he could get rid of the Romans! Women were different. They relied on maternal instincts, on experience of a mother’s love of her children, and they intuitively felt that what Jesus said made good sense. They believed in him. Jesus offered them a potential view of a better world; he provided a glimpse of light at the end of a long tunnel.

When the Gospels were written many years after the death of Jesus, the story and imagery of the birth of Jesus (and the references to the continuing presence of his mother, Mary) confirmed to women everywhere that motherly love, and the loving family were at the heart of the Gospel message. There was the additional bonus of eternal life in heaven: something that had much greater attraction then, than it has in 2016.

Kate Cooper explains how women helped Christianity to spread, during that long period when Christians were often persecuted. Kate also discusses what happened in the fourth and fifth centuries, after the Church was officially accepted in the Roman Empire and bishops became rich and powerful.

Thousands of women were appalled. They believed in the virtues of purity and poverty, and often chose to live in closed communities, focussing on prayer and spiritual values. We now know that, about one thousand years later, St Julian of Norwich responded in a similar way, when she wrote down her ideas, intuitively, from the heart.

St Julian’s ideas were as old as the teachings of Jesus. The same ideas had influenced the lives of early Christian women, many of who suffered martyrdom for their convictions.

In 2016, many women hang on to these same intuitive convictions. They can be seen in churches all over the Western world. They provide evidence of the existence of a ‘women’s theology’ that has proved its resilience well into our modern scientific and materialistic age.

I believe that elements of this response to Christianity could provide the foundation for a twenty-first century revival in churchgoing by intelligent women and men. As to whether the established churches will let this happen - that is another question.

The image is of Julian of Norwich