Women in the spread of Christianity 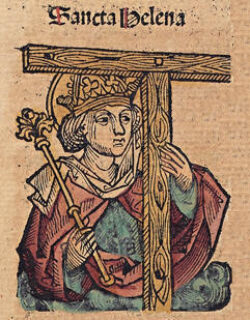 In my family I didn't have siblings, but my female cousins, my mother, aunts and grandparents, were all independent thinkers, not afraid to offer their own opinions; they could match menfolk in any discussion. It is commonly believed that in ages past women rarely had this opportunity to influence debate. The authors of Genesis, for example, could only visualise God as male, and the woman as a helper to man: she was seen as an after-thought, made from a spare rib. It follows that much of the Bible was written by men who, largely, thought in this way.

What amazes me is that, regardless of this way of thinking, so many women figure in the Gospels. Christine Pedotti deals with this subject in depth in her Jesus: cet homme inconnu, published by XO Editions, Paris, 2013.

Women were among Jesus’ early disciples: Mary Magdalene, Joanna, Susanna. They accompanied Jesus and supported him out of their private means. Women were at the Crucifixion, and recorded as the first witnesses of the Resurrection. St Paul later mentions by name many women he encountered during his missionary journeys, who played key roles in establishing the earliest Christian groups or churches. There was Lydia, Evodia and Syntyche, of Phillipi, and Cloe, in Corinth. In his letter to the Romans, Paul sends greetings to Prisca. Mary and the ‘beloved Persis’ are commended for their hard work. Julia and Nercus’ sister, also Tryposa, Phoebe, and Junia are mentioned. Paul gave Phoebe titles: diakonos (deacon), sister, and prostasis (patron, benefactor); Junia is called a ‘prominent apostle’.

This is not new information. It is just that the role of women in the early Church has rarely been sufficiently stressed. Wealthy women (maybe widows) opened their homes to fellow Christians and organised the first house groups, acquiring considerable status in the process in a short-lived phase. While people met in private houses provided by patrons, the influence of women could be accepted. In Galations 3: 28, Paul wrote that, ‘There is neither Jew nor Greek, there is neither bond nor free, neither male nor female, for you are one in Christ Jesus’: in Jesus there is no difference between Jew and gentile, free people and slaves. Thus, in God’s eyes (Paul suggested) there is equality between men and women.

There are conflicting quotations. In his Letter to Timothy, Paul underscores the necessary submissiveness of women. In 1 Corinthians, 11:5, Paul says that women should not speak in church, but ask questions of their husbands, at home. However, some commentators believe that these are ‘post-Paul interpolations’ written in the second century when the Church had become institutionalised and patriarchal, also, they are not consistent with Paul’s other dealings with women.

Woman deacons were common from the 4th to the 6th centuries, but over time, any pro-women tendencies in the Church were suppressed by male Church leaders, who accepted the Classical-World view that women could not direct men. As the early Church built churches and organised itself on a full time basis, women simply had their nose pushed out.

But, behind the scenes, women continued to exercise considerable influence, particularly in those regions where Christianity was still extending its reach. This fact needs emphasising. From the earliest days of the early Church, women were among the first to be attracted by the teachings of Jesus.

Four examples are sufficient to illustrate what may have been a general pattern to be observed in hundreds, if not thousands, of situations.

The first example is the influence that the Empress Helena had on her son, Constantine the Great. Helena is described as an important figure in the history of Christianity, due to her major influence on her son, and her own contributions on placing Christianity at the heart of Western Civilisation. She made a pilgrimage to the Holy Land in her old age and ‘discovered’ many Christian relics. The Eastern Church, the Roman Catholic Church, and the Anglican Church revere her as a saint. She influenced thousands of people.

My second example is the wife of the first King of ‘France’, Clovis. Clovis conquered northern Gaul in 486. He married Clotilde, a Christian daughter of a Burgundian chief, and later converted to Christianity. He was baptised in 496. He was bloodthirsty, treacherous, and ambitious, but eventually, he had an important influence on the rise of the Church Militant in France. There is little doubt that his wife and her clerical entourage had a big influence on him.

The third example is the wife of Ethelbert, King of Kent. In 597, Augustine was sent by Pope Gregory I (with 40 companions) to preach the gospel to the English. He was received hospitably by Ethelbert and given permission to dwell in Canterbury and preach to the English. Ethelbert had a Christian wife, Bertha, who, by the marriage contract, was permitted to privately practice the rites of her religion. It is not difficult to imagine her influence on Ethelbert, who was later baptised. Under his kingship, Christianity flourished (though he did not force all his subjects to convert). (Note that in 597, the ancient Britons had a Christian Church of their own, but it did not acknowledge the authority of Augustine. A few years later, the Britains were defeated with ‘great slaughter’ by a King Ethelfrith of Kent. So much for Christian co-existence?)

My fourth example is the wife of Edwin, King of Northumbria. Edwin became King of Northumbria in 617. (Note: He founded Edinburgh: Edwin’s borough.) In 625, Edwin married Aethelburh, a Christian princess and sister of Eadred, King of Kent. Aethelburh brought with her Churchmen (including Paulinus, the great missionary of North England). Edwin was baptized in 627, and thereafter strongly forwarded the Christian cause. Aethelburh has to be given some credit for the expansion of Christianity in Northumbria.

Helena in Constantinople, Clotilde in France, Bertha in Kent, and Aethelburh in Northumbria: these were women who had a major influence on the expansion of Christianity in Europe. They show that women often got there first. I like to think that these four represent the tip of a big pyramid, made up of countless women Christians who promoted their faith to their men. If true, I suspect they did this because they were quicker than men to value the Christian Gospel of love and its potential to heal a broken world.

My point is that the women in this period did not look at Christianity and condemn it because the world was dominated by men. They knew that this was a reality in a violent world. But perhaps Jesus made them believe that something different was possible. He spoke a language of love that women could identify with, and they realised that women figured prominently in his story.

We all need to understand that these women lived in a world in which violence ruled: where ‘real-life’ was the dominance of the strong over the weak (as witnessed in the behaviour of human beings, animals, birds, and insects). It was a world where life and nature were unpredictable, bringing misery, disease, starvation, and death, on a daily basis. The tribal and later feudal systems only made matters worse. To women of these Dark Ages, Christianity offered a ray of hope of a better world, here or beyond the grave.

I imagine them listening to a traveller speaking about new ideas and the excitement produced by new ways of thinking (particularly in an age with no radio, television, and all the media that is available to us all in the twenty-first century). Women would have first talked to women, sharing stories about Jesus of Nazareth. In the awful world of the Dark Ages, the Christian message made clear sense. It just happened that in many cases, women were the first to recognise the fact.

Sources: The facts referred to above can be found in many texts. Jesus: cet homme inconnu, by Christine Pedotti, Paris, 2013 and Jesus for the Non-Religious, by John Shelby Spong, New York, 2008, are principal sources, as is Wikipedia, and my own set of the Globe Encyclopaedia, 1879, which is a wonderful source for biographies of ancient kings and Church history.

Image: St Helina of Constantinople, This is a part of a scan of an historical document: Title: '''Schedelsche Weltchronik''' or ''Nuremberg Chronicle'', from the original book, 1493, author Michel Wolgemut, Wilhelm Pleydenwurff (Text: Hartmann Schedel). Published in the US before 1923 and public domain in the US.