Why I am thankful for feminist theology

Australian theologian, Val Webb, recently completed a tour of the UK. The talks she gave can now be read, in an expanded version, in the Resources section of this website. In this excerpt she outlines the importance to her of feminist theology. 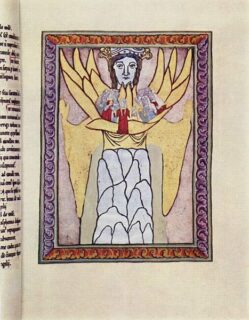 Feminist theology played an important part in my evolution. When I was first introduced to feminist theology at an academic level, it suddenly dawned on me that many of my childhood doubts about Christianity came from being a girl raised in the fifties and sixties.

While I was encouraged to achieve the highest grades in school and gained first class honours in science at university, the unspoken message was always that this was a fall-back position in case I did not marry – good Christian women were preferably helpmeets, wives and mothers. I did marry and have three lovely children, but I also watched my male colleagues with lower grades take the prime research jobs I would have loved, and be fathers and husbands as well!

Marcus Borg calls feminist theology the most important theological development in his life-time, because it gave us another way to view our Christian traditions. Rather than start with what the bible and church says about women, it begins with women’s experiences and reflects on what might be good news for them, then challenges traditional doctrines that are bad news. For centuries, women had been named subordinate to men -- less intelligent, less reliable and a host of other insufficiencies somehow wound into their DNA. These claims were created by men with power to write the rules, yet women secretly knew this did not fit their experiences. Had they not borne children at great risk, carried great loads and heavy toddlers and held family and community together when men went to war? Their doubts, however, were discredited as insubordination, ignorance or sin.

Not until enough women entered theological colleges in the late sixties did they find other women questioning these ideas. They realized how much the Bible had been translated and interpreted in the interest of male power and was itself the product of a patriarchal culture describing God’s will in male-favouring cultural terms. Women scholars asked, therefore, whether anything said about women could be applicable today if it came from a culture that saw women merely as disposable male property. The Bible approved the slaughter of Jephthah’s daughter as Jephthah’s bribe to God for military victory and Jephthah was listed as a great man of faith in the letter to the Hebrews. The Bible did not condemn Lot for offering his virgin daughters for gang rape by the mob at his door, in order to protect his male house guests. In the New Testament, the pastoral letters of Timothy and Peter renege on Jesus’ egalitarian attitudes towards women by demanding they be silent in church and obediently subordinate to husbands. My book Why We’re Equal: introducing Feminist Theology came out of my reflection on such doubts.

Feminist theology learned to call itself feminist theologies when women of colour, indigenous women and lesbian women challenged white heterosexual academic explanations of a homogenous women's experience. Contextual theology became contextual theologies when people realized that different contexts produce different theological insights and conclusions. I believe it is time for progressive theology or progressive Christianity to be called progressive theologies and progressive Christianities, in order to represent adequately the broad spectrum of ideas, emphases and actions. At first, feminist theologies sounded a bit awkward but it soon became common sense that women of colour would have different issues from white western academics. Womanist theology, as it came to be called, was concerned about the whole black community, men and women oppressed under white domination, not just women against oppressive husbands and male leaders. Black women needed to boost up their men as much as struggle for their place as women, and white western middle class women were part of their problem, not the solution.

Many progressive Christians have resisted affirmation statements of what progressives believe in order to respect this diversity and keep open the future in this fluid time of discoveries. Obviously, there is need for some beginning statements to define progressive groups to themselves if not to others, but we have been rightly hesitant about universal statements, in part because we do not want to become locked into new "boxes" that will, in time, move from general affirmation of similarities to confessional statements with power to bind and exclude.

The whole of this article has been published in the PCN Britain Resources section.