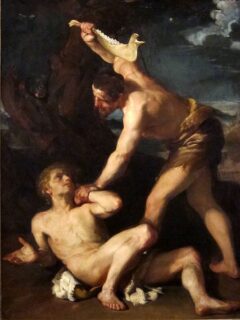 Most people, including scholars, think the story of Cain and Abel is about two brothers one who was a farmer and the other a shepherd but this is not the case.

​The name Abel, meaning ephemeral, makes it perfectly clear his role in the story is simply to get blown away. This means the story is not about two brothers who as a result of economic diversification become rivals. Rather it is a story about a man called Cain who becomes a marginal as a result of killing his brother. This makes him a pariah in the community where he is living, as Yahweh (Cain’s conscience) is swift to point out. So Cain is forced to become a marginal living in the land of Nod, a mythical place of utter despair where there are no prospects of any sort since nothing grows. (What a perfectly marvellous, succinct and evocative way this is of bringing to mind the condition of the marginal. I find it deeply moving. However, I imagine that to appreciate it fully you would have to be a marginal yourself). Contemplating his fate, Cain is naturally inconsolable. He cries out in anguish that it is more than he can bear. Yahweh is driving him out of the community to a place where he will be forgotten even by Yahweh himself. To cap it all there is the very real prospect that anyone who finds him will kill him in revenge.

In later accounts concerning the patriarchs (Abraham, Isaac and Jacob) the writer of this story often describes moments when a character he is talking about suddenly finds himself or herself marginalized and it is always at such moments that Yahweh reveals himself to them, thereby showing that he is the god of the marginals and therefore their god. This is precisely what Yahweh does here. He begins by telling Cain that he couldn’t be more wrong in thinking that as a marginal he will be forgotten. To make his point unmistakably clear Yahweh puts a mark on Cain showing that, as a marginal, Cain now is his personal property in a way that he wasn’t previously when he was an honest and law-abiding person with a place in society like everyone else. This, of course, is a point which scholars as law-abiding folk with a place in society find quite unacceptable so they either avoid it or else explain it away in any number of different and ingenious ways. However, their problems are not over for there is more to come!

Doomfully, Yahweh declares that anyone who dares to kill Cain in revenge will be severely punished, and not just severely punished but punished by being given the maximum sentence imaginable: death seven times over. The point being made is that there is nothing, but NOTHING in the whole wide universe that is worse than attacking a marginal, for marginals belong to Yahweh as god of the marginals. I am aware of course that people will object to what I have just written pointing out that in Genesis 4. 13-14 Cain specifically says:

"My punishment is more than I can bear. Today you are driving me from the land, and I will be hidden from your presence; I will be a restless wanderer on the earth, and whoever finds me will kill me."

Doesn’t this mean that Yahweh punishes Cain by banishing him? Well, no it doesn’t. Punishment is an authoritarian act that adds a supplementary woe to the suffering already experienced by a criminal whose crime has been uncovered. If you read verses 11 and 12 carefully you will see that Yahweh does not punish Cain with banishment. As I have indicated above he simply spells out the inevitable consequences of Cain’s act given that it has become public knowledge: for now, of course, Cain cannot remain in the community with all the exchanges with neighbours that this implies.

In our society we would have dealt with the matter by putting Cain in prison but there were no prisons in those days. Consequently, discovery of his crime of itself renders Cain a marginalized outcast. Being civilisation officials and consequently judging Cain to be beyond the pale, scholars have traditionally translated the Hebrew word describing Cain’s appalling predicament as ‘punishment’. However, honesty has meant that even they have felt it necessary to cover themselves by adding a note in the margin saying that the actual Hebrew word used does not in fact mean punishment but rather ‘shameful condition’ or ‘guilt.’ So, no, Cain is not punished by Yahweh. However, as we have just seen, law-abiding folk (like us) who would take revenge on people like Cain most certainly are threatened with punishment and how!

Of course it’s not just biblical scholars who, as modern day revisionists, persist in rubbishing the terrifying point the Hebrew myth-maker is making. Their ancient counterpart – the priestly writer of Genesis 1 – did the very same thing. He was most probably one of the administrators of the post-exilic community, a government official working on behalf of his Persian overlords with responsibility for good order. So it’s natural he couldn’t accept the mythmaker’s point that god-fearing civilisation folk who take revenge on Cain are a thousand times more guilty than the marginal himself. Because of this he lost no time in inserting a ‘corrective’ in Genesis 9.6:

"Whoever sheds the blood of man, by man shall his blood be shed; for in the image of God has God made man.

What we find here is the time honoured, conservative ‘image of god’ formulation – with its wretched, authoritarian civilisation-perspective – used to cover up and obscure the mythmaker’s mind-blowingly important, marginal stance.