What is Nelson Mandela's heroic quality?

Former PCN Trustee, Alison Morley, makes a link between Mandela, Tolstoy, Ghandi and other twentieth century heroes; their understanding that the world can be changed if we change ourselves 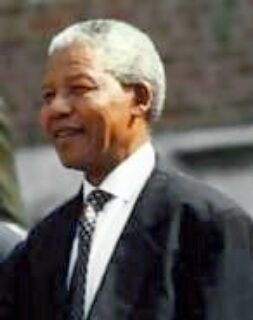 ‘I sometimes believe that through me Creation intended to give the world the example of a mediocre man in the true sense of the term’ (Mandela: 'Conversations with Myself', page 7).

This is a mediocre man who proved that there can be the highest honour and integrity in the human being. A man who is embarrassed when caught in the act of braking prison rules (passing letters) in front of a young prison guard who he knows will turn a blind eye because of the respect that has grow up between them. Mandela is hurt and embarrassed because in some pure and fundamental way he has betrayed this young guards trust and put him in the position of having to fail in his job. He has diminished himself and created a barrier between them. (Conversations with Myself page 193). This is a subtlety of feeling and a development of conscience that few of us will ever attain but when we read it or see it we know that this is the truth of who we could be.

He wrote in a letter from prison in Feb 1971

It has been said a thousand and one times that what matters is not so much what happens to a person than the way such a person takes it. It may sound silly for me to burden you with what is a matter of common knowledge. Yet whenever it is my turn to be a victim of some misfortune, I forget precisely these simple things, and thereby let hell break loose upon me.

To honour Mandela and to remember South Africa’s great ‘Rainbow Nation’ dream we watched ‘Invictus’ as our rainy Sunday afternoon movie. It is the beautifully observed story of Mandela’s encouragement of the Springboks rugby team in the lead up to the 1995 South African World cup. Carefully crafted, well scripted and deeply moving it is an absolute must watch for anyone who dares to believe that we can change the world by changing ourselves.

The radical Christ inspired a way of living that is only possible when individuals take responsibility for their actions and grow up. This is something that the State will always be nervous about encouraging us to do. This is part of Tolstoy’s anarchism and that of all great moral leaders because this is not about easy formulas that can fit on banners and in policy statements. It is about the evolution of the human consciousness and the elevation of what we might call individual morality and this makes for complicated high level responses. If we take the example of Jesus and try and find his formula we can, like Tolstoy, look for the unchanging essentials of his ethical teachings, but they are so constructed that they demand ever changing, subtle responses to each and every situation that we face in our lives. If we say ‘What would Jesus do?’ the answer is, ‘well, we are not quite sure, something extraordinary!’ That is what these great leaders do because their reactions are not out of a book or a manifesto they are the result of hours and years of the crafting of the human spirit to an excellence that astounds us.

Each age has its calls to this moral high ground. It is absolutely essential however that this is not prescriptive but a call to individual transformation. The reason that I love Tolstoy as an example is that his fervent desire to transform his beloved Russia was constantly thwarted by his acknowledgement of his own failure to transform himself. This humility can seem impotent but anything else can be terribly dangerous. There is a balance between public example and private transformation that has to begin in private. Leaders that don’t begin there are just not worth following.

I am encouraged that Mandela, Martin Luther King, Gandhi and the Dali Lama are heroes that are still taught about in schools. This allows for the beginning of a conversation about personal values, spiritual growth and the possibility of justice and joy in human living that is waiting to be had. (Wouldn't it be wonderful if our churches were the places that this conversation continues!) These living examples will always be out of step… hence the radical bit …. but it is wonderful that even in the all embracing fog of society’s cynical mediocrity we can still see their greatness. That gives me real hope.