What I Would Ask the New Chief Exec of Canterbury

Justin Welby is the first Archbishop of Canterbury whose background includes being a chief executive in private industry. As one of his newly acquired junior employees, Sonya Brown, has prepared a few probing questions she would ask the boss, should she get invited to a 'team development day'. 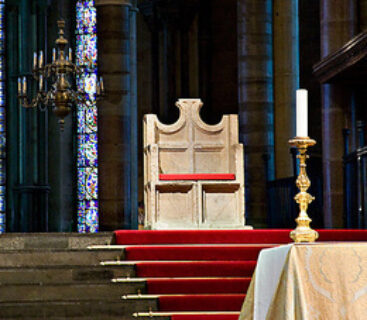 Just before I was due to go to theological college I worked as a temporary call centre worker for an international insurance company. This organisations as far as I could see had the morality of a monkey nut and a staffing policy which was less about ‘caring for our staff at every level’ and more about wanting stones worth of flesh for every pound. The longer I worked there the more irritated and critical I became.

One day I could take the corporate, money grabbing nonsense no longer and announced in our team meeting that the gruelling ‘staff member of the week’ competition was draining people and making them miserable rather than motivating them in their work. This was subsequently axed and apart from those five people who always won the weekly bottle of wine, the team were relieved from the burden of ‘trying to make a very rubbish job more interesting’. It was a rubbish job and we were all there just to put bread on the table, why dress it up as anything more? But, of course that was our opinion on the ground and as call centre staff we were only a notch higher than the cleaners and security guards. I doubt that the chief executive saw it this way.

One day I actually got to meet the man at the top of our regional department in another team development day. A small group of us volunteered to meet with him in his office one afternoon for a question and answer session. Most of the group was made up of those who wanted to know how to climb the ranks of the industry but a few of us wanted to ask the Chief Exec some uncomfortable questions (the call centre was on the verge of being closed at this time with a the threat of being outsourced to India) and to actually see this person in the flesh, who led our organisation on his three figure salary.

I wanted to know what drove him in his desire for a career in this field – was it really money, a top notch life style or the esteem that comes with such a high corporate position? He was actually very generous with his answers and when I left I felt like I’d grilled him Paxman style and (this is the best bit) it turned out that his Dad was a vicar and he grew up in very cold vicarages! I then told him that every lunch time I poured over theology books in the staff room in between shifts ‘on the phone’ and that we really could do with better facilities for staff – less cheesy team development spin and more real changes that would enhance our working lives there.

When I read Archbishop Justin Welby’s inaugural speech it reminded me of my experiences in the private sector and the interview with the chief executive and I thought, what questions would I ask Justin if I had an hour of his time? It seemed to me that his sermon this week was loaded with corporate speak and this is one of my first concerns for such leadership in the CofE and across the world.

I would begin by asking Justin how as a Church we can continually exclude the rights of gay people, disengaging with the secular view and how this fits with a theology of love. I would also ask him what his view is on other faith traditions and spiritualities, what does he think they have to offer as people of God and how can we serve the worlds neediest and poorest together? I would also like to ask him how he came to terms theologically with sad events that have happened in his personal life and as a consequence does he believe in a God that determines the events of our lives or is he broader in his understanding of the power or rather powerlessness of God on such fronts? More pointedly, if he doesn’t understand God as the mythical, almighty figure of fairy stories then is he going to publically declare this? Justin didn’t refer to any of these points in his first public speech and I will try my very sceptical best to reserve judgement for now and see, like many of us, how the story unfolds. I just hope he doesn’t introduce any team development strategies as I fear that the players from HTB may win ‘employee of the week’ every time!