What does it mean that Christ died for our sins?

Andrew Parker argues that the metaphor of being 'saved from sins', used by St Paul and St John was taken too literally by the Medieval church and in the process the political reality of Jesus' message was lost. 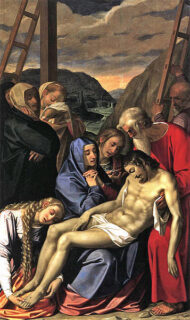 Since the Middle Ages and the rise of conservative-revisionism within the Catholic Church the traditional answer to this question has always been that Jesus died for our sins to make atonement for them. However, in recent years liberal scholarship has rightly pointed out that this is just a spurious conservative gloss not found in the texts for the very good reason that, however you understand the idea of atonement (and any number of ways have been tried) it invariably reduces the texts themselves to nonsense. This is all very well but it still leaves us with the question as to what Paul meant in I Corinthians 15.3:

For I handed on to you as of first importance what I in turn had received: that Christ died for our sins in accordance with the scriptures ...

He makes it clear he is talking about something central to the early Church's message but what?

For my money the expression 'Christ died for our sins' has to be understood as a post-resurrection faith statement . Jesus' followers simply couldn't get over what he had done and found it all but impossible to put into words what they had witnessed. As a result they ended up going, as some would say, over the top. Personally, I find nothing wrong in using over-the-top 'religious' (i.e. mythical) language in confessions of faith just so long as everyone knows what you are doing. For example, in my own case I speak of Yahweh as 'the god of the marginals' meaning by this that he is the personalisation of the Hebrews' marginal ideology - much in the same way as, for example, the god Enlil was the personification of the Mesopotamian military elite's conservative ideology . Because of this, when I make my own confession of faith I say that in the resurrection Jesus himself became the marginal ideology. Taken literally, this statement is nonsense since a human individual and an ideological perspective are two quite different things. That said, my point - that there is no difference between the marginal ideology (i.e. Yahweh) and the marginal ideology perfectly worked out in practice (e.g. by Jesus as Yahweh's Son) - is perfectly sensible and in no way mysterious. I happen to believe this is precisely the point the evangelist John was trying to make when, at the start of his gospel, he spoke of Jesus as the pre-existent logos.

However, the trouble with faith statements couched in mythical/religious language (as above) is that they are an open door to superstition: to you, yourself (and others later) reading literally what in the first instance was only meant as a representation. This is what happened in the Medieval Church. Whether Paul and John made this mistake themselves is a big question. I believe there are very good reasons for believing they didn't. However, it cannot be denied that they were responsible for creating the language which the Medieval Church took at face value, thus falling headlong into the superstition trap.

When you think about it, this going over the top and falling into the superstition trap amounts to taking a hard, down-to-earth and verifiable political explanation of what Jesus had achieved and turning it into a soft, ethereal and magical explanation. So what was the point in doing that? Well the problem as ever with the marginal perspective ... which Jesus had so magnificently managed to embody ... was that while it gave unlooked for hope to the all too numerous marginals present, it scared the living daylights out of most civilisation-folk, which is what Christians themselves all too soon became. For it identified them and their privilege-seeking way of living as constituting the problem that had to be addressed if the world was to be changed. In other words, Jesus' message was found to be simply unbearable by these new Christians ... and especially those in leadership positions ... since it meant questioning the whole world of privilege on which civilisation has always been built. However, all hope was not lost for they found that they could very easily make Jesus and his message just about bearable by the simple expedient of turning it all into religion. For in this way they could pretend to continue to give Jesus their allegiance without having to change their ways and live differently. This is a practice which many still employ ... and it amounts to the purest hypocrisy wouldn't you say?

So, if we shouldn't try to avoid what Paul was saying by taking what he said at face value ... reading his mythological language religiously ... how are we supposed to understand his words? Surely what Paul was trying to express was the enormity of what Jesus had achieved (i.e. that he had faithfully carried out Israel's task to be Yahweh's light, going so far as to face death without being certain it would make any difference)? And because he succeeded where no-one else had managed, Paul believed Jesus had shown not only what was to be done but more importantly that it could be done and that the effect on the rest of humanity in softening people's hard hearts (resurrection) ... was capable of changing the world.

All are welcome to a launch of the book at 5.30pm on Friday 27th September at the Cornerstone Bookshop, St John’s Terrace, Princes St, Edinburgh EH2 4BJ.

Andrew Parker’s readings of familiar biblical texts as presenting a marginal, political, ideological Hebrew worldview, profoundly in opposition to the status quo (then and now both) is contentious, illuminating and genuinely challenging. He stimulates in his readers dialogue and questioning, sometimes agreement and often fury, but always passionate engagement. This in itself makes this book worth reading. But it is, equally, a valuable discipline in struggling to see from a very different perspective than the one we usually allow ourselves when reading the Bible. Kathy Galloway; former leader of the Iona Community, Head of Christian Aid, Scotland

1. I take it as read that, like the miracle stories, the evangelists’ stories about the resurrection have to be understood representationally rather than crudely. For a fuller explanation of my understanding of the resurrection please see para. 13 on the ‘Findings’ page of my website here: http://bibleincartoons.co.uk/findings.php

2. I see the Bible as an ideological text in which the main concern is to highlight the political ideas generated by the Hebrew marginals. For a fuller treatment of this proposition please see para.1 onwards on the ‘Findings’ page of my website here: http://bibleincartoons.co.uk/findings.php

Image: The Lamentation, by Scipione Pulzone (1544-1598), Metropolitan Museum of Art