What Do Progressive Christians Think of Billy Graham? 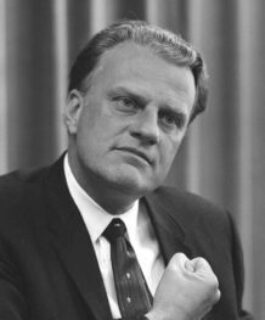 Overall I’m sure Billy Graham was probably a decent and caring person with genuine motives to help the world. But in many ways I think Billy Graham was one of the worst things to happen to Christianity over the past few decades.

He harnessed his magnetic type of passion and charisma to convince a whole generation about a very flawed theological understanding of Jesus and the Bible. And on top of that he raised his son Franklin Graham, who is now one of the leaders in the radical right wing political movement. A movement which has co-opted American evangelicalism as a primary voting block for tea party Republicans – the types who prioritize guns, benefits cuts to the poor and sick, and mass deportations – which is very different than what the historical Jesus stood for.

Now that said, compared to that movement which reflects the likes of his son Franklin Graham, Billy seemed a lot more moderate in his tone (especially as he aged). He seemed to have a type of love in his voice that we don’t sense as much from modern fundamentalists. He was probably a good man to others around him, and he probably helped a lot of people in need. He probably also convinced a lot of people to live for something more holy and meaningful in their lives, which is definitely a good thing. He was also once recorded later in his life as saying that everyone will go to heaven as long as they have Christ in their heart (see here), even if they’ve not realized it or understood it consciously – which is a very inclusive message when compared to what we hear from many of today’s fire-and-brimstone-veiled-by-a-starbucks-latte-and-skinny-jeans type of pastors.

But again, he has hurt a lot of people with his message; especially the LGBT population with his hard line stances claiming that being gay is a serious sin which will be met with God’s judgment. And his views that we were in our “last days” with Jesus returning at any moment also caused many of his followers to pay little regard to urgent environmental and climate justice issues. There were also reports that he once suggested that Dr. Martin Luther King Jr. “put on the brakes a little” when he started to practice civil disobedience for political change.

And lastly, I also recall years ago a story about him and one of his best friends. They both began to recognize the many inconsistencies and logical errors that came along with a literal interpretation of the Bible. And it was recalled that when faced with that dissonance Billy simply decided on faith to deem the Bible as God’s inerrant word and live his life accordingly without any further questions. When the facts and cognitive dissonance came, he simply shut it down to any further evolution, which I think can be one of the most unfortunate things anyone could ever do, especially if we plan to go out and evangelize the world to our point of view.

Eric Alexander is an author, speaker, and social activist. He serves as Editor-in-Chief of ProgressingSpirit.com and is a senior board member at ProgressiveChristianity.org, where this blog first appeared. You can read the whole blog, including Eric's short introduction, here