What Can We Do Now That There Is No God? - 2019 is the centennial of Iris Murdoch's birth

Vance Morgan writing for "Freelance Christianity" observes that writing in the decades after the Second World War, Murdoch assumes that human beings are required to grapple with a difficult world lacking the tools provided by traditional Christianity 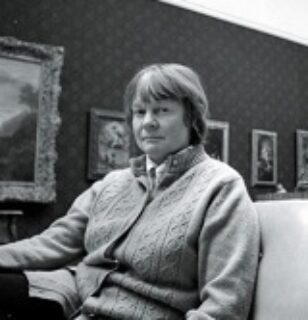 Several weeks into the new year, I am for the first time getting to teach three of my favorite courses in the same semester. One of these courses involves an in-depth investigation of the work of three of the most important writers of the twentieth and twenty-first centuries, all of them women. One of these women is Iris Murdoch. When constructing the syllabus last summer, it did not even occur to me that 2019 is a particularly appropriate year to be introducing a dozen very bright students to Murdoch’s philosophical and literary work. 2019 is the centennial of Iris’s birth, with various celebrations planned in the U.K. and beyond to honor the work and life of this extraordinary woman. Last Friday was the 20th anniversary of her death in 1999 after several years of advancing Alzheimer’s disease.

Iris came into my life a number of years ago when I discovered that Simone Weil—a thinker so influential on my intellectual and spiritual development that my wife Jeanne calls her my “mistress”—was similarly influential for Iris Murdoch (Simone is another of the thinkers on the syllabus in my current course). In her last completed work, Murdoch asks a question that is arguably the central issue explored in both her fiction and her philosophical work—What can we do now that there is no God?

Writing in the decades after the Second World War, Murdoch assumes that human beings are required to grapple with a difficult world lacking the tools provided by traditional Christianity (or any other traditional religious framework). Yet she is by no means a happy atheist along the lines of Richard Dawkins, Sam Harris or Daniel Dennett. Murdoch believes that traditional conceptions of the divine, along with the various frameworks that have traditionally surrounded those conceptions, are meaningless, yet points out that while it is easy to say that there is no God, it is not so easy to believe it and to draw the consequences.

Put differently, human beings are not the sorts of creatures that can simply fill the vacuum created by the absence of God with the closest thing available. We are incapable, by sheer force of will, of addressing the spiritual hunger and need that now-defunct frameworks and vocabularies were intended to address. There is something in the human heart that needs to believe in something greater than ourselves.

The search for the transcendent, for what is greater than ourselves, in Murdoch’s hands becomes a high-wire act with no safety net. She sets for herself the task of finding out what can be preserved of belief in the transcendent and in moral goodness without the trappings of religion that have supported such beliefs—a “Religionless Christianity” if you will. She preserves the notion of faith, but without guarantees—persons with such faith intuit something greater than themselves but refuse to embrace traditional descriptions of this something. Murdoch calls such a person a “mystical hero,” a person who has given up traditional religion but is still haunted by a sense of the reality and unity of some sort of spiritual world. . . . This hero is the new version of the man of faith, believing in goodness without religious guarantees, guilty, muddled, yet not without hope. This image consoles by showing us man as frail, godless, and yet possessed of genuine intuitions of an authoritative good.

Such a person, Murdoch believes, will exhibit many of the characteristics that traditionally religious people might aspire to.

Our life is an interconnected whole and a religious man would feel responsible for the quality of all his thoughts and experiences . . . This sort of perpetual work seems to me what religion is . . . It’s humility, and unselfishness–and setting yourself aside to make room for other things, and people.I thought of Murdoch’s mystical hero not long ago when reading an article describing how more and more of the students enrolled at various divinity schools across the country are unaffiliated with any religious denomination. Such students are called “nones” (pronounced “nuns”), since they are the sorts of people who check “None” when asked about their religious affiliation on a survey.

I think this is very cool, but something tells me that many traditionally religious people would stop reading after finding out early in the article that nones are predominantly found at places inclined toward theologically and politically liberal Protestantism like Harvard Divinity School and Chicago Theological Seminary. “Well of course,” the complaint might go. “Such places are bastions of secular humanism with words like ‘Divinity’ or ‘Theological’ on their letterhead for show.” Such concerns are not unique to the Protestant flavor of Christianity; I have taught for the past twenty-four years at a Catholic college that, at least according to its current President, seeks to thread the needle between extreme conservative Catholic campuses and larger Catholic Universities (usually Jesuit) that many judge as CINO (Catholic in name only).

The game of “who is more faithful to the message” is usually zero sum, though, and leaves little room for phenomena such as the nones. What might an agnostic or even an atheist find attractive about divinity school? Several of the nones interviewed in the article provide clear answers. “I am attracted to the search for social justice and for spiritual meaning. And I recognize those things as the fruits of religious tradition,” one none said. “So it makes sense to go to a place where you can study religious tradition.” Another could have been channeling Iris Murdoch: “If you were simply looking for the skills, you might go to the Kennedy School of Government . . . and philosophy and liberal-arts fields have given up on the project of finding a moral language, an articulation of values. That language isn’t found in many places. And when you find it, it’s not easy to abstract it. You have to connect it to a tradition.”

Current research reveals that one-third of millennials are nones. Where are such persons to find a spiritual home or community? If Iris Murdoch is right, the answer to that question will require great creativity and courage across the board, even in traditional places where such creative and courageous challenges to the status quo seem to strike at the very heart of what the place stands for.

I am not a none, but only because I believe that the Christian tradition is broad and resilient enough to accommodate outliers with the nerve to call themselves freelance Christians. And a “heads up” to the nones who are deliberately placing themselves in the atmosphere of divinity school—you never can tell what might happen. Meister Eckhart, a medieval Dominican monk who almost lost his life due to his out of the box theology, wrote that “God begets his Son in you whether you like it or not, whether you sleep or wake—still God is at work.”

And more recently, Lutheran pastor Nadia Bolz-Weber reported that a person wrote her a worried email:

I think I’m having a crisis of faith . . . I think I believe in Jesus.

To which Nadia replied:

I’m so sorry. But sometimes Jesus just hunts your ass down and there’s nothing you can do about it.