Transfiguration and the ballot box

John Churcher sheds light on the story of the transfiguration of Jesus as an example of Jewish midrash. It means that Jesus is the new Moses. And it provides a lesson as we go to cast our votes in May. 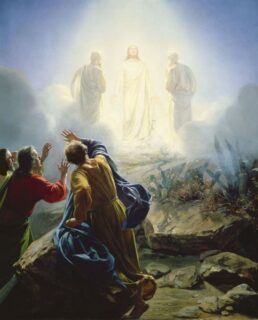 Second, the original Transfiguration story was written by Mark some 30 years or more after the supposed event, but it was written as explanatory story, not as history. It was written to communicate Eternal Truth within its Jewish rabbinic midrashic style of writing.

Third, notice that in the Hebrew and Christian Scriptures, mountains usually signified an important encounter with God, a place of supernatural revelation. Consider again the story of the Transfiguration of Jesus: it is the midrash retelling of the Moses story!Jesus took 3 of his followers with him as he climbed high into the mountain, probably Mount Hermon whose summit is in present-day Syria on the border with Lebanon and the Golan Heights.

The nearest town at the time of Jesus would have been Caesarea Philippi. Consider also the book of Exodus, chapter 24, written some 600 years before Jesus during the Babylonian Exile, where we have the story of Moses taking with him 3 followers high upon Mount Sinai.

Notice what happened next in these parallel stories. A cloud descended upon Jesus and his 3 followers as they stood high up on the mountainside, just as a cloud had descended upon the mountain and enveloped Moses. Jesus was completely changed, and the story says that the disciples witnessed that his clothes became much whiter, like a shining light, just as the followers of Moses had looked on and are said to have witnessed God’s glory covering the mountaintop like the light of a blazing fire.

This is not a prophetic or miraculous coincidence – it is midrash - it is rabbinic story telling at work!

So what were the writers of the Gospels of Mark, Matthew and Luke trying to convey – not as history but as midrash? They were saying that Moses and Elijah remained enormous characters in their Jewish religion, history and tradition, but in Jesus they had found the one who is not only within that same Jewish prophetic tradition but he had the status of both Moses and Elijah.

This was profound for the Jewish listeners at that time, especially with the realisation that the writers were adding, "in Jesus we have found the new Moses!" Just as the fire and light of God’s supernatural presence was shown to be with Moses, so in the story of the Transfiguration of Jesus there is the confirmation of greatness when the same fire and light of God’s supernatural presence fell upon Jesus. This was a literary device – an interpretative explanation rather than an accurate historical record of what may or may not have happened to Jesus.

Although the story of the Transfiguration of Jesus is, in my experience, not an historically factual event, nevertheless it is a sacred Jewish story packed with eternal truth for Jews and Christians alike. It sets Jesus into the great tradition of Hebrew prophets even though the majority of Jews at that time, and in the following centuries, have ignored him or rejected him.

But what was it that set Jesus into that prophetic tradition? And here I interpret 'prophecy' not as some kind of crystal ball, soothsaying, forecasting or foretelling of things to come. I interpret it within the original Biblical meaning of 'forth telling' of God's mind to the people.

It was and remains a proclamation of the wisdom of God concerning what heaven on earth should look like.

It is a counter-cultural, subversive proclamation of a different way of living.

It was and remains such a challenge to what people accept as being 'normal' that only the few will take it up and live by it while the many will reject it.

It cost Jesus of Nazareth his life.

On the whole, people do not like having their comfort zones invaded by someone claiming to be speaking God's challenging subversive word!

And here I use the idea of 'conventional cultural wisdom' as the way we have been socialised and taught to think and act as the 'norm' for us and our society. I also use the idea of the alternative subversive wisdom of Jesus as God's way of transformational living.

So what was the transformational truth, the subversive wisdom of Jesus to which he called people at his time, and which continues to call us today? I am indebted to Christian Testament scholar, the late Marcus Borg, for the following analysis:

Conventional cultural wisdom sees God as a punitive lawgiver and judge, but the alternative subversive wisdom of Jesus was and remains that God is gracious and compassionate to all people.

Conventional cultural wisdom values a person's worth by the extent to which that person lives up to the accepted normal social standards and expectations, but the alternative subversive wisdom of Jesus was and remains that God treats every individual person as having infinite worth as a child of God. In this subversive alternative world, people are not blamed or penalised for being poor or destitute or marginalised!

Conventional cultural wisdom treats sinners and outcasts as those who are to be avoided, blamed and rejected, but the alternative subversive wisdom of Jesus was and remains that everyone is welcome around the table and in the kingdom of God, just as they are.

Conventional cultural wisdom is that we should strive to be first, to be the best, to be the 'man or woman of the match', but the alternative subversive wisdom of Jesus was and remains that the first shall be last and those who exalt themselves will be emptied.

Conventional cultural wisdom is that it is right and proper to try to preserve one’s own life above all else, but the alternative subversive wisdom of Jesus was and remains the path of dying to self and to selfishness: it is the path of being constantly reborn into life abundant.

And with 81 days to go before the General Election it will be the political party that will realistically come closest to creating a new radical 'norm' that will enable the alternative subversive wisdom of Jesus to be implemented - that is the party that will guide me towards my decision come 7th May!