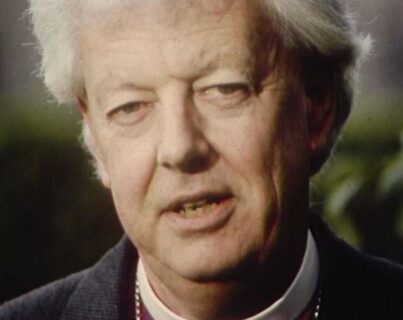 When David Jenkins lectured, his speaking speed was like an express train. It was often hard to take in what he had just said that challenged, enthused, encouraged or enlightened me before he was off on the next thought of significance. He was in the tradition of scholar bishops of Durham such as Lightfoot, Henson, Ramsey and Ramsay – but he was very much a one-off.

He wanted to bring to the general public the knowledge of where understanding of the gospel accounts such as the birth narratives and the resurrection, were being taught in so many academic theological departments for many years. What he said is commonly shared in the writings of Marcus Borg and Jack Spong and others more recently. When he was saying it so publically, he was shouted down and derided by conservative Christians who felt threatened. So many senior clergy and others who shared his views were reluctant to go public with their support for him: he was hung out to dry in that respect. He spoke of the private support such people gave him, but he got very little public support from them.

He was a loving man. He was deeply moved at the suffering of the mining communities in his diocese, and critical both of the Coal Board and of the Thatcher government whose policies the Board was implementing. He wept when recounting seeing a young miner, getting changed after a shift, and crying because of the impending closure of his pit, and all that meant to his family and community.

In retirement he bravely conducted a service of blessing for a gay couple – because he was convinced the establishment needed to be challenged on this issue.

He remained in the North East in retirement in a rural village in Teesdale, but sadly Alzheimer’s Disease captured his personality and brain in the latter part of his life. Had it not he could have continued his stimulating and challenging ministry for many more years than he did.

At the time of David Jenkins’ consecration as a Bishop, I was struggling to justify my membership of the Anglican church. Thirty years previously, as a 19-year-old, I had decided that I was agnostic and had left the church, although with a guilty feeling of having denied the sacred vows I made on confirmation. Now, 30 years later, personal circumstances led me back to give the church another chance. I was in need of spiritual comfort but still unable to believe in the virgin birth, the physical resurrection, or many of the miracles. How was it possible to call myself a Christian whilst denying some of the basic tenets? I had read John Robinson’s Honest to God when it was new, finding it interesting but not personally convincing. And now, along came this academic to be made Bishop of Durham. The more I read about him, the more exciting I found him. Surely, if a Bishop can openly deny these things, then it must be alright for me to be a full church member.

Over the period of his bishopric, I read many of his books and went to hear him numerous times. I felt he spoke directly to me and to my condition and I found him warm and encouraging. All of his talks were to packed and highly appreciative audiences; it was obvious that his message was attracting many who never attended church. Had he ever been a parish priest, I feel sure he would have recruited many to the church.

After his retirement I felt a personal loss, reinforced by the loss of another priest who condoned my hang-ups; my courage gradually left me and I finally felt I had no option but to find a spiritual home elsewhere. I am now a Quaker, not required to believe any specifics, but happy to ‘love my neighbour as myself’ and to serve my chosen community. I remain grateful to David Jenkins for his warmth and his example on being a Christian.

A friend who was ordained by David Jenkins has written:

I always found Bishop David stimulating to listen to. He preached with passion and integrity with familiar alliteration and some phrases which became his trade mark: 'God is as he is in Jesus and there lies our hope'; 'We may not be up to it but God is down to it'.

Preaching to the clergy at the Maundy Thursday Chrism Mass he was often near to tears as he tried to articulate what was most important to him - a deep faith in 'God' as love made known in and through the person of Jesus of Nazareth but with very little dogma attached.

The so called controversial elements of his theological understanding were nothing new to those who had studied some theology, it was just that nobody had dared to expound them from the pulpit, and yet in doing so he brought a liberating perspective for those who found 'traditional formulations' no longer credible.

His passion for social justice was also evident in his preaching and his pastoral interventions, which brought him great affection from the struggling mining communities of his diocese.

He remains in my opinion one of the great Bishops of Durham, the likes of which we have certainly not seen since!

The chair of PCN Britain, Adrian Alker, has a letter in the Guardian about David Jenkins, in which he criticises the preoccupation of the Church of England with matters of sexuality while neglecting honest discussion about theology, of the kind that Bishop Jenkins initiated. You can read Adrian's letter here