Prayer – the practice of the presence of God

Ray Eveleigh, a retired clergyman who leads a progressive Christian group near Driffield, makes a plea for us to find a way to pray which escapes the boundaries of a theology we can't believe in. 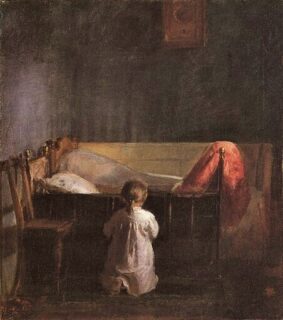 I have several good books on ‘How to Improve Your Snooker’. I have others on piano technique and jazz improvisation which I have read with great enthusiasm. However, what they have in common is the insistence on regular practice. This is time consuming and it requires a high level of commitment and discipline which, alas, I lack. The same thing can be said of Prayer – the practice of the presence of God. To love means to spend time in the other’s presence. Archbishop Desmond Tutu said that he needs to spend two hours in prayer each day otherwise he fails to cope with the demands of his ministry. I knew a lady once – she was my sister’s mother-in-law and a devout Roman Catholic – who said that she went to early Mass every morning, otherwise she would not be able to cope with her family of seven children.

So, what is this thing called ‘prayer’?

In Matthew 6:6 we have the teaching ascribed to Jesus: “When you pray, go to your room, close the door, and pray to your father, who is unseen, and your Father, who sees what you do in private, will reward you”. And then in verse 7f we have the further teaching of Jesus on prayer: - “When you pray, do not use a lot of meaningless words, as the pagans do, who think that God will hear them because their prayers are long. Do not be like them. Your Father knows what you need before you ask him. This is how you should pray: “Our Father in heaven .....”. Here the emphasis seems to be on private prayer. In the parallel passage in Luke ( Q ), Jesus tells the parable about the man who ran out of bread in the middle of the night and went to his friend’s house to borrow three loaves. He is told to be persistent in his asking and he will get his way. Jesus continues with the famous ‘Ask and you will receive; seek and you will find ..... The passage ends with “how much more then, will the Father in heaven give the Holy Spirit to those who ask him!” Private prayer is the means of finding a personal life in God’s presence. It is the ‘Practice of the Presence of God’.

I can’t say very much about prayer in other traditions but I’m sure that prayer is always to be understood in terms of the tradition in which it is nurtured. A Buddhist monk at prayer is doing what is understood as prayer in the Buddhist tradition. Also I’m sure that many prayers are offered in rugby matches at the millennium stadium while others find it easy to pray on a country walk or at the seaside or when listening to music. Michael Ramsay is reputed to have said “all my best prayers whilst driving my motorcar”.

In a recent broadcast talk by Rowan Williams, he expressed a deep interest in and respect for the tradition of Russian and Greek Orthodox Christians. In particular he referred to the practice of praying repetitive mantras like the Jesus prayer, ‘Lord Jesus Christ, Son of the living God, have mercy upon me, a sinner’. This practice is also familiar to Roman Catholics who pray, ‘Hail Mary full of grace, blessed art thou among women, and blessed is the fruit of thy womb, Jesus.’ Also Rowan Williams referred to the close link in Eastern Orthodox tradition, between spirituality and theology. To me this is a central point. It is matter of great importance and vital to the future of Christianity that our spirituality should be informed by our theology.

William Temple said “If you have a false idea of God, the more religious you are, the worse it is for you – it were better for you to be an atheist.” Rudolf Bultmann asserts that “In order to express the ‘trans-historical’ character of the historical event of Jesus of Nazareth, the New Testament writers used the ‘mythological’ language of pre-existence, incarnation, ascent and descent, miraculous intervention, cosmic catastrophe, and so on, which make sense only on a now completely antiquated world view. Thus, modern people are put off by the very things which should be translating that historical occurrence into an act of God for them, but which in fact merely make it incredible. If Bultmann is right, the entire conception of a supernatural order which pervades this one must be abandoned. But if so, what do we mean by God, and what becomes of prayer? Take for example this prayer from the BCP:-‘ O Lord our heavenly Father, high and mighty, King of Kings, Lord of Lords, the only ruler of princes, who dost from thy throne behold all the dwellers upon earth; we most heartily beseech thee ...”. Is this image of God as the omnipotent King who beholds us from on high commensurate with the glorious hymn of Philippians 2 ‘for the divine nature was his from the first; yet he did not think to snatch at equality with God, but made himself nothing, assuming the nature of a slave.’

In His book ‘Why Christianity must Change or Die’ Bishop John Shelby Spong claims that the Theistic concept of God must be put aside. By Theism, he means the God who is defined as a supernatural being who exists in heaven and who intervenes in his creation to miraculously change the course of history. He raises the question ‘Can God be real if all images of God as a super parent, and thus a personal deity, are dismissed’? If Christianity depends on a theistic definition of God, then we must face the fact that we are watching this noble religious system enter the rigor mortis of its own death throes. “Can one be a Christian without being an atheist?” This is rather an echo of the psalmists question “How do we sing the Lord’s song in a strange land”?

As a retired Anglican priest, I find it increasingly difficult to pray. How do I ‘practise the presence of God’, when all the traditional language of prayer seems to be called into question. Must I replace Our Father..’with ‘Ground of all Being’? And what about all the allusions to penal substitution in our Hymns? I am increasingly drawn to silence and find the tradition of Quakers very attractive. However I would find the absence of the Eucharist a great loss (I’m not sure why*). I also feel that listening to music is a good way of heightening my awareness of the presence of God and the beauty of creation, where God is present with us and around us. The English composer Gerald Finzi opens a curtain to reveal something of this glory in ‘Dies Natalis’, where in words by the poet Thomas Treherne, he proclaims’:- ‘’The green trees, when I saw them first, transported and ravished me, their sweetness and unusual beauty made my heart to leap, and almost mad with ecstasy, they were such strange and wonderful things.’’

It may well be that in broadening my search for a new spirituality to include music and poetry; I can become more aware of the presence of the all embracing love of the divine.

*In the several versions of the Lord’s Supper in the Gospels one thing is clear; prayer was a community experience. It is in the Eucharist that the Church has a hearty desire to pray. It begins and ends with thanking and offering ‘ourselves to be a holy and living sacrifice’. Unfortunately this basic sharing in a fellowship meal has been so embellished with dogmatic assertions regarding the function of the Eucharistic ritual, that the original simplicity of the ‘agape’ or ‘love feast’ has to a great extent been obscured. Also the desire of theologians like Thomas Aquinas to interpret the biblical text in 1 Cor. literally, has led to the most horrendous acts of violence between Catholics and Protestants, and is still a stumbling block to any hope of Christian fellowship. How ironic is that? Of course there has been considerable work done by the Liturgical Commission over the years to update the language and theology of the Eucharist, there is still much to be done to clarify the theology of atonement in order to make sense to modern ears.